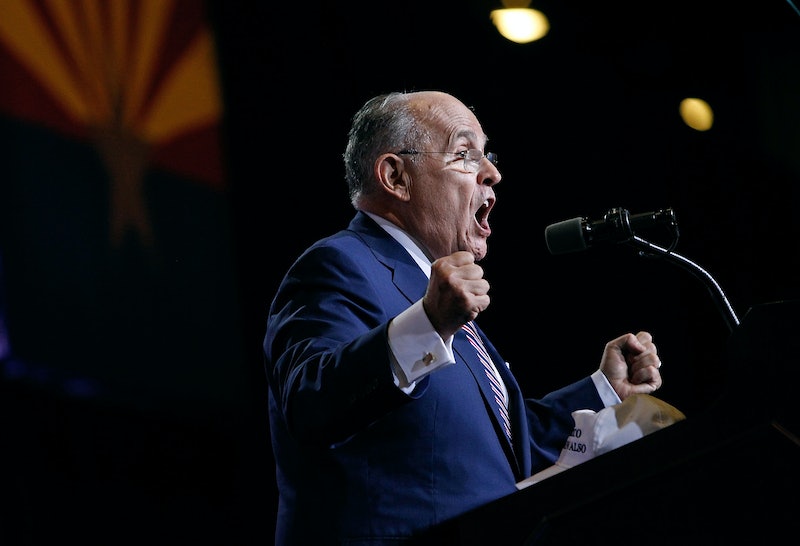 The Trump campaign's gender relations problem just got a lot worse. Donald Trump surrogate Rudy Giuliani appeared on ABC News on Sunday evening to discuss allegations over the weekend that Trump has not paid taxes for years. Giuliani used the campaign's standard talking point, that not paying taxes is somehow indicative of Trump's economic savvy and that he should be admired for doing so. Bizarrely, however, Giuliani seemed to center these comments around the gender of Trump's opponent, arguing that Trump would be better for America than "a woman":

Don't you think a man who has this kind of economic genius is a lot better for the United States than ... a woman?

Giuliani's tone was even more jarring than his words. He looked to the side as he said "woman," spitting out the word as if he expects it will leave a bad taste in his mouth. It was such a strange way to phrase his point that ABC News reached out to Giuliani for additional clarification, though he has not yet responded to their request for comment.

As for Trump's "economic genius," Giuliani is referring to The New York Times report released Saturday which claimed that Trump reported a loss of almost $1 billion in 1995, and then used that loss to avoid paying taxes for the next two decades. Trump's contractors reportedly went unpaid, and his ordinary shareholders saw the value of their investments plummet. Arielle Brousse at Vox wrote a harrowing account of the economic misery that befell Atlantic City in the years after Trump's investments began to crumble: "My friends and neighbors were beholden to him, manipulated by him, played as cogs in his machine."

So what kind of an "economic genius" is Giuliani talking about? A male one, at least.

Giuliani's remarks play to a deeply ingrained stereotype that women are inherently worse at math (and science) than men. A man, we seem to think, even a hypothetical one, will be better at math (and by extension, economics) than a woman. That is why Giuliani did not mention his candidate's opponent by name -- his superiority and his gender are taken to be one and the same.

The "woman" in question is, of course, Democratic presidential nominee and former Secretary of State Hillary Clinton, who emphasized her opponent's history of sexist remarks during the first presidential debate:

But this is a man who has called women pigs, slobs, and dogs, and someone who has said pregnancy is an inconvenience to employers, who has said women don’t deserve equal pay unless they do as good a job as men. And one of the worst things he said was about a woman in a beauty contest. He loves beauty contests, supporting them and hanging around them. And he called this woman “Miss Piggy.” Then he called her “Miss Housekeeping” because she was Latina.

Trump's already-infamous response to the accusations was a Twitter rant at the crack of dawn, during which he accused the pageant contestant in question, Alicia Machado, of having appeared in a sex tape. It did not endear him to feminist voters. Neither, it seems, will Giuliani's comments.

It's clear that Giuliani's "woman" comment couldn't have come at a worse time for the Trump campaign. If Trump and his surrogates continue to attack and dismiss women, they may inadvertently elevate one to the White House.