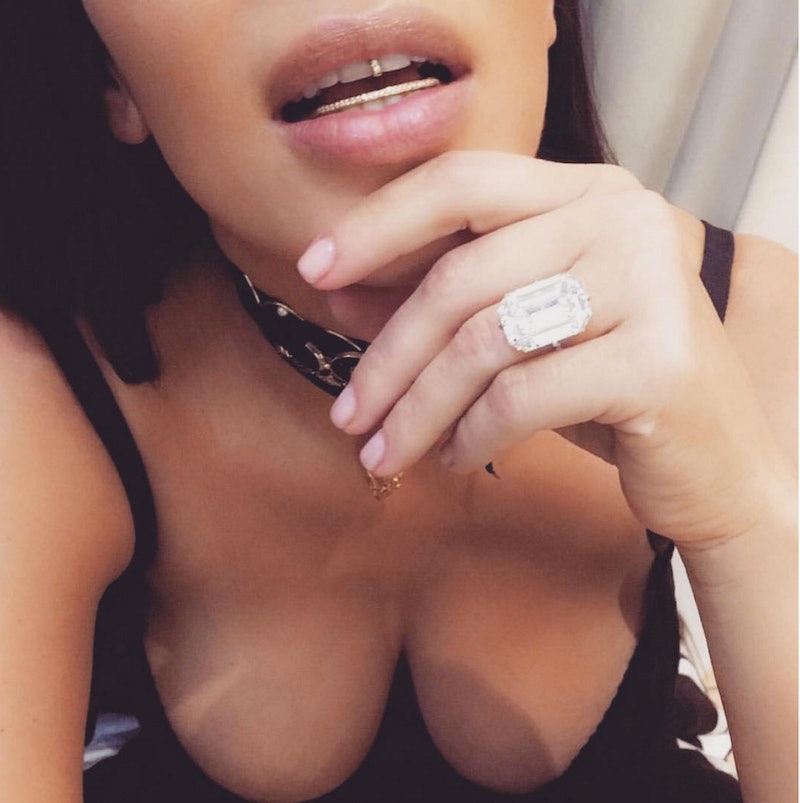 News broke on Monday that Kim Kardashian was robbed at gunpoint by a group of men dressed as policemen, sources say, who made off with around $10 million dollar-worth of jewelry from Kardashian's hotel room. Kardashian's "second engagement" ring was stolen, along with a jewelry box containing $6.7 million-worth of jewelry, two cell phones, 1,000 euros, and Kardashian's purse.

Clocking in at 20-carats, Kardashian's $4 million dollar ring was a gift from Kanye and made its first appearance at the VMAs last month. A big-ticket item that Kardashian had posted a selfie of just three days ago, the ring was taken in what police are calling a highly-organized, planned raid — after gagging and handcuffing the concierge at Kardashian's hotel at around 2:25 a.m., the five masked men broke into her room and held Kardashian at gunpoint before tying her up and locking her in the bathroom. According to TMZ, Kardashian was able to break free of the duct tape restraints and call for help after the gunmen left.

Coming at the tail end of Paris Fashion Week, a spokesperson for Kardashian says she was "badly shaken but physically unharmed," and her children were not present for the incident. Kardashian boarded a plane back to the United States a few hours after the robbery, while husband Kanye made waves for stopping a concert at Meadows Festival in Queens, New York upon hearing the news.

No doubt an unsettling incident, the gunmen are still at large after biking away from the scene of the crime. The robbery comes just days after Kardashian was assaulted by Vitalii Sediuk, the same man who attempted to pick up Gigi Hadid. While Kardashian has allegedly spoken with authorities about the incident, people on Twitter have other ideas about how best to catch the robbers.

Regardless, here's hoping Kardashian recovers from the crime and resumes posting as usual. Commenters on Instagram are speculating that her ring selfie made her a target, but the Kardashian we know doesn't live in fear — she gets receipts for revenge.

We'll have to stay tuned to see what happens next.