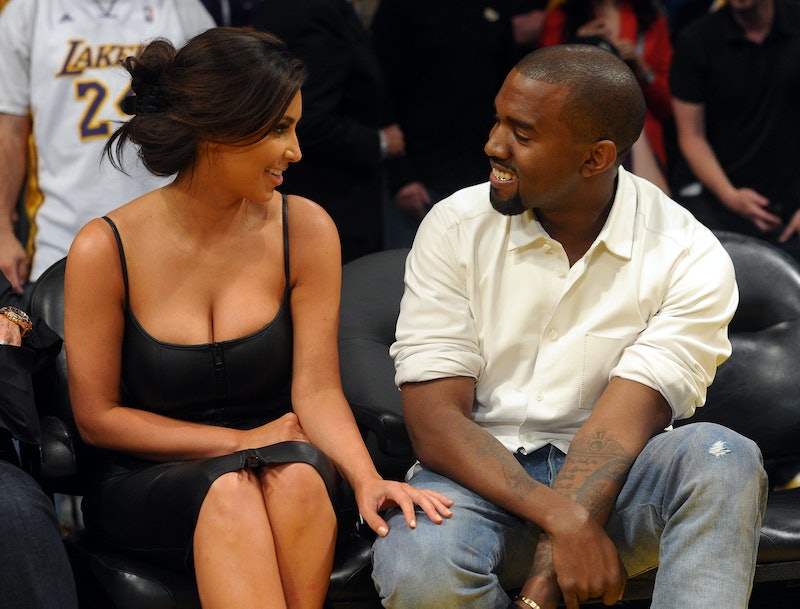 When the words "celebrity couple" come up in conversation, for me, the first names that come to mind are always Kim Kardashian and Kanye West. Not only do they already have a legendary marriage (and two adorable kids), but they have the history to back it up, too. As anyone who's been watching Keeping Up With The Kardashians since the beginning already knows, these two were in each others lives long before they were husband and wife; they were actually really close for years before they started dating. In fact, Kanye was even on Kourtney & Kim Take New York , and the scene is ridiculously cute.

It actually happened on the show's very first episode, "Life in The Big City" — which first aired in January 2011. Kanye and Kim would take their relationship public about a year later, but at this point, they were still just friends. Very, very flirty friends. In the ep, Kim and Kourtney are checking out the location of a DASH store they wanted to open up, and Kanye comes by to see it, and it's pretty obvious he's coming by to see Kim, too. I mean, it's pretty clear that they had feelings for each other before they started officially dating, but this scene seals it.

They talk about Kim's birthday, and she invites him to Vegas to celebrate with her and her friends. And then, there's the best part of all: When Scott Disick walks in, and Kanye (the fashion designer) is legit impressed by his style. But let's be real. Aren't we all impressed by his style?

I may not have realized it the first time I watched this episode, but looking back, it's super easy to see the chemistry between these two. Kim is usually pretty put together, so to see her reduced to a giggling mess in Kanye's presence is really telling of the feelings she must have already had for him. They were totally meant to be! And Kim wanting Kanye's opinion on her business decisions? She clearly valued what he had to say, even when they weren't together yet.

If you want to relive the episode (and the rest of Kourtney & Kim Take New York, because it is pure gold), it's streaming on Hulu — and definitely worth the rewatch — but you can watch just the Kim and Kanye clip here.

North and Saint, your parents are adorable. Say what you want about these two, but you can't deny their love story is the best.