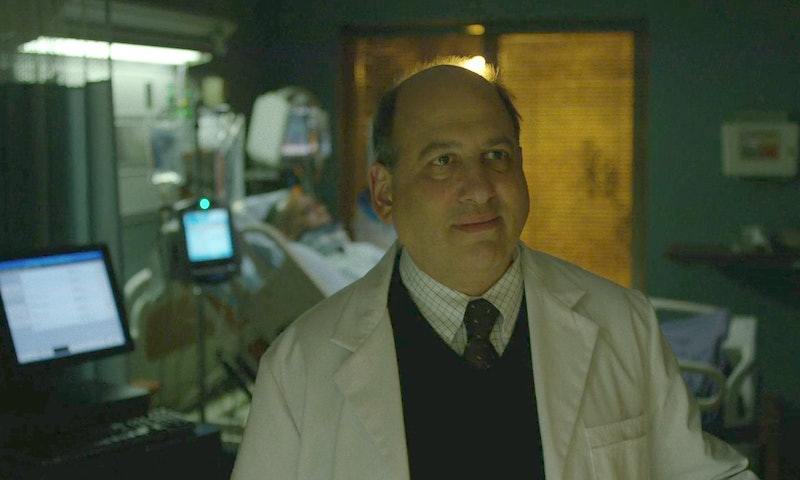 Spoilers for all of Luke Cage Season 1 ahead. There's no denying that Diamondback is defeated at the end of Season 1 of Marvel's Luke Cage. After a late-night brawl between the villainous alter ego of Willis Stryker and his childhood friend (who is actually his half-brother) Luke Cage, Stryker ends up bruised, bloodied, and generally in bad shape. Although his Hammer tech super-suit couldn't help Stryker take down his superpowered sibling, Season 1 ends with a hint that he could be coming back with the help of a familiar doctor, as the season finale of Luke Cage showed Diamondback with Doctor Noah Burstein. While we don't know exactly what this means for Stryker's future, it certainly suggests that there is trouble ahead.

Dr. Burstein is introduced in Luke Cage as something of a mad scientist, using prisoners as subjects for his experiments on improving the human body much like the super soldier program that created Captain America. After he was reintroduced to Dr. Burstein, needing the good doctor's expertise to save his life, Luke discovered that Burstein was, in fact, a bad doctor and destroyed his lab. While that may have seemed like a good idea at the time, it gave Luke Cage yet another enemy who is now working alongside Luke's biggest foe. And ultimately, destroying the lab didn't stop the doctor, as he was able to recover the data from his experiments thanks to a hidden hard drive. Unfortunately, that data may be exactly what Diamondback needs to kill Luke.

As Dr. Burstein explained in the series, something about Luke Cage's DNA caused the then-prisoner to survive an excess of exposure to his experiments. While Luke sees this as a curse, there's no denying that being bulletproof and having the ability to lift massive objects has some huge advantages. It's not clear if Willis Stryker went to Dr. Burstein or if it was the other way around, but it's possible that Stryker could return with some of the very same powers that make Luke near-unstoppable.

It's likely that Burstein reached out to Stryker because the villain known as Diamondback has something that this mad doctor needs — Luke Cage's DNA. Since he and Luke Cage are half-brothers, there may be something inherent in Willis Stryker's body that could allow Burstein to finish the experiments that he started at Seagate prison. It also doesn't hurt that the person he's gifting these abilities to will likely be more enthusiastic to take them and will probably go beat up the guy that wrecked Burstein's lab. Thanks to Stryker's DNA and Burstein's recovered data, there's a good chance that the next time he fights Luke, Diamondback won't need his super suit.

In the original Luke Cage comics, Diamondback doesn't stick around for long. However, there's a chance that if Willis Stryker returns to future seasons of the Netflix series will be adapting the plotline of another Marvel villain. In Marvel comics, Dr. Burstein isn't just responsible for Luke Cage — he is also the scientist behind villains such as Bushmaster and Warhawk. In a way, Burstein is the ultimate Luke Cage villain, as all of his scientific experiments simply create new villains for Cage to defeat. The Marvel Netflix Universe still has a lot of juice left in it, and it's safe to say that fans haven't seen the last of Willis Stryker, Dr. Burstein, or the doctor's powerful creations.