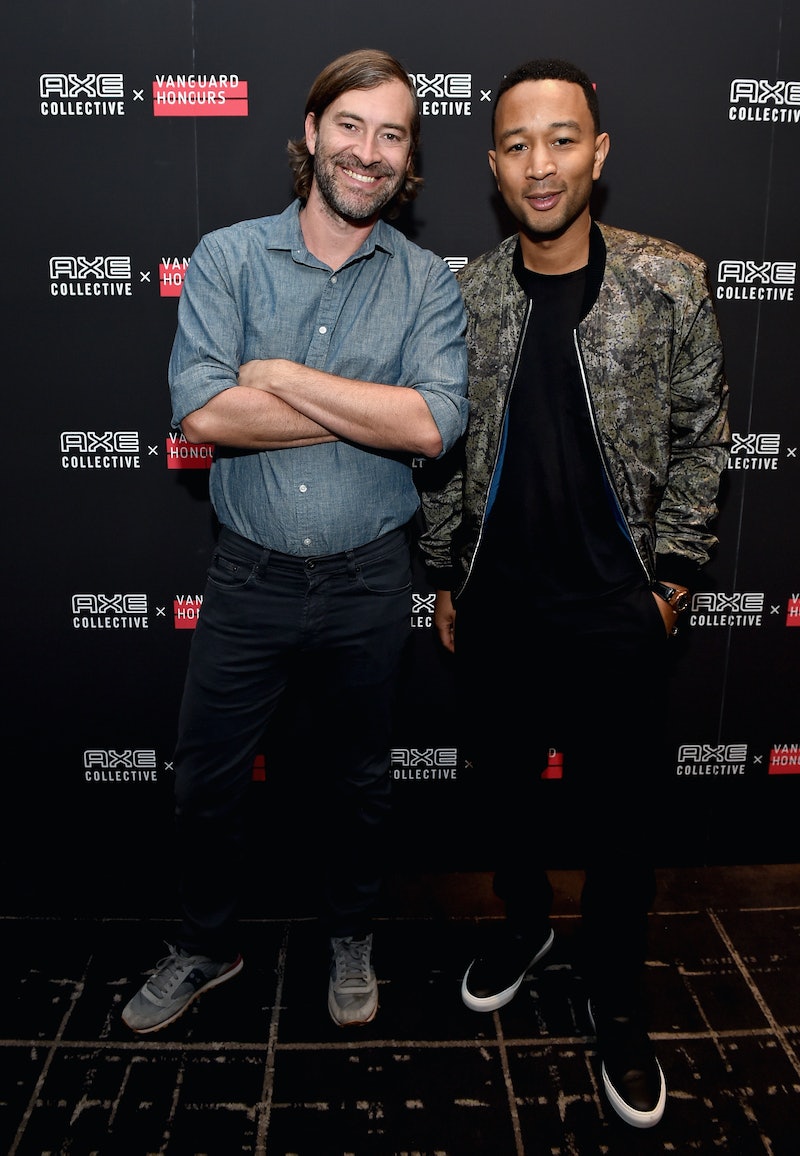 John Legend and Mark Duplass are partners with the AXE Collective mentorship program to help three up-and-coming filmmakers thrive in showbiz. After witnessing them in action at the Toronto International Film Festival, it seems they have the whole mentoring thing down pat. And I have a feeling there are three little girls — Luna, Molly, and Ora — who have something to do with that. Though Legend and Duplass claim they’re still learning to navigate fatherhood while guiding young daughters, it’s evident that being parents helps them grow immensely, not only as mentors, but as men. And besides getting a drum kit for the house (because “girl drummers get whatever they want,” according to Duplass), the two already have a solid idea of how to nurture strong-willed and driven women in the world today.

Legend, who welcomed Luna last spring with wife Chrissy Teigen, admits he hasn’t played much of a mentor role to his daughter, who’s barely six months old. Still, he can’t wait to. “I can’t wait for [Luna] to be able to talk so I can teach her,” he says. “I really think that I’ll enjoy the teaching aspect and helping her to become a good human being.” Duplass, who’s a parent to Molly and Ora with wife Katie Aselton, has some advice for Legend. Part of it is the “20 percent rule.”

Duplass implements the rule to teach his daughters that they can succeed, regardless of forces trying to suppress them. “When you’re raising women in this world, they need to know that they can, with good cognitive energy and clear thought and planning, topple the king,” he says. At home, he’s established his role as the authoritative figure, but in one out of every five arguments, his daughters “are able to destroy [him].” “You gotta back off and show them they can win,” the 39-year-old explains. “When she has a boss that’s being a dick to her, like I am there, she can topple him.” I see Legend nodding, taking mental notes, but he has A+ parenting tips to bring to the table as well.

“I hear a lot about how to be good parents to girls,” says Legend. But perhaps the most significant and challenging aspect of parenting young women he’s learned thus far is teaching them to ignore commercial messages telling them how they should act and look. The 37-year-old knows this is damaging in more ways than one:

The whole princess thing, the idea that they need to be perfect, a lot of times, that’ll stop them from taking risks, because they’ll figure they can’t be completely perfect at it so they don’t wanna do it. They’re afraid to fail, they’re afraid to try new things. Sometimes boys are given the confidence to just say, ‘F*ck it,’ and do it.

He knows how important it is to teach his daughter to be authentic and fearless, but now it’s about execution. “Hopefully I’ll get it right,” he says. Both men agree that raising young daughters not only shifts their view of the world, but of their own lives and careers, causing them to turn down project after project to put their girls first.

“I’ve been working my whole life to get yeses. Now I have so many yeses that if I take them all, I won’t be able to be a good parent,” Duplass explains. Legend can relate. “I’m definitely in that ‘no’ phase. A lot of it is just a matter of deciding what’s important to you,” he adds. “I know that I love making music, that’ll never change… Having a wife and a kid — hopefully multiple kids — makes you [think]… Is it worth it? How important is this to me that I’m gonna miss time with my daughter? And my wife?,” says Legend.

It’s evident that their unconditional love for their daughters effortlessly enhances their drive to help and nurture others — even if they are complete strangers. “Parenting makes you more empathetic,” says Legend. Duplass, who, like Legend, goes above and beyond as a mentor, agrees. “There’s this old saying, ‘Once you become a parent to a child, you become a parent to every child in the whole world.’ You start to feel a different way about anyone you see in need,” he says.

Their AXE prodigies, Shema Jones, Francisco Cabrera, and Tabi Bonney, are just three people who will say Legend and Duplass are extremely dedicated and giving mentors. And as far as the whole fatherhood thing goes? They’ll be just fine.

More like this
Looks Like She Made It
By Lindsay Zoladz, Beau Grealy and Tiffany Reid
Everything You Need To Know About ‘Black Panther: Wakanda Forever’
By Bustle Editors
Lindsay Lohan & Jonathan Bennett Celebrated Mean Girls Day Very Differently
By Jake Viswanath
Christian Bale Sang With Taylor Swift & His Daughter Can't Believe It
By Radhika Menon
Get Even More From Bustle — Sign Up For The Newsletter