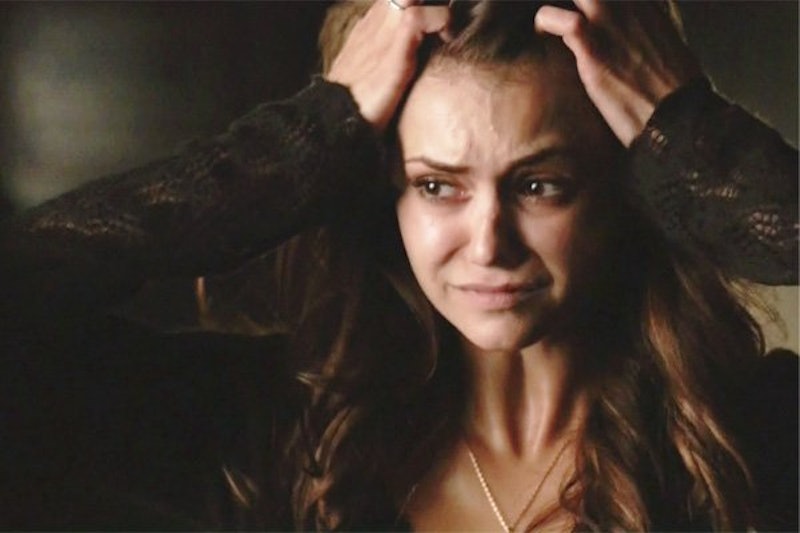 "The bitch is back" doesn't seem appropriate for describing the return of Elena Gilbert. It would have been perfect for her evil Doppelgänger, Katherine Pierce, but now Kat is gone for (hopefully not) good. Still, someone is back and the Elena we're met with isn't the most pleasant, so let's go with it for now.

Elena is back in "While You Were Sleeping," but she's not quite herself. Like Damon, she's infected with the Ripper virus, which makes her crave vampire blood in a bad way. Unlike Damon, however, her strain of the virus has a kick of hybrid venom, making it lethal if untreated. Hallucinations and accusations ensue. Elena is losing her mind and Damon is determined to help her. The biggest source of her distress? The nagging belief (thanks to her own guilt-fueled hallucinations) that she killed Aaron. When Damon finally admits that he was the one who killed Andrew, they argue, they fight, they say their relationship is over and then… well, you can guess what happens next. It's Delena, after all.

So Delena are back on (in a physical sense), but swearing up and down that their relationship is toxic and doomed and needs to end when they try to bring the logic. This is, of course, the beauty of the Damon/Elena dynamic. They are toxic. They are bad for each other. They are probably doomed.

But then, they're also so hot. So electric. So right.

I'm prepared for some heartbreak next week. They said they're off. They're acting like they're on. Who knows what's going to happen next? Who knows what the talk after the winkwinkeyebrowraiseknowingsmirk will bring? But for now, for the rest of this glorious week, Delena are together. And here's why they should stay that way, as told by GIFs and hopeful shipper fandom.

Take that, Stefan. Seriously, this is almost NSFW.

Say what you will about Stefan. He was dependable. He was consistent. But he was also a little stiff. As a recovering Ripper, Stefan has to practice intense self-control at all moments. Damon can let loose and live in a way that he can't. It's a shame that Elena had to wait until she was dead to be able to love a guy who could help her live, but such is life (erm… death?).

They bring out the best in each other.

Stefan and Elena worked because they were attracted to each other's best qualities. With Damon and Elena, it's often the opposite; they're attracted to the worst things about each other, but when they come together, they bring out the best, each striving to be the person the other needs and deserves.

Even when things bottom out, they still love each other.

It's never smooth sailing for Damon and Elena. It can't be; that would be boring television. But even in the worst of times (and they do have a lot of worst times), they never stop caring about each other. They never stop loving each other.

Damon might not be the brother who wants to let Elena make her own choices (like when those choices involve self-sacrificing things like dying for Matt), but he always challenges her. Where Stefan is always ready to step back and let Elena figure things out for herself, Damon prefers to jump into the thick of things and force Elena to confront other points of view and the real obstacles in her path. He doesn't shy away from telling her what he thinks, even if she won't like it. The result is a relationship built on compromises, not forfeits.

They have incredible chemistry.

And you just can't fake that.

More like this
There's At Least 1 Major Difference Between The 'Vampire Academy' Book & TV Series
By Grace Wehniainen
Kaley Cuoco Was Set Up With Her New Boyfriend Tom Pelphrey By Her Manager
By Hugh McIntyre and Jake Viswanath
'The Rings Of Power' Episode 6 May Reveal Sauron’s Identity
By Grace Wehniainen
Mike Flanagan Teases 'The Midnight Club' In This Exclusive, Creepy Clip
By Grace Wehniainen
Get Even More From Bustle — Sign Up For The Newsletter