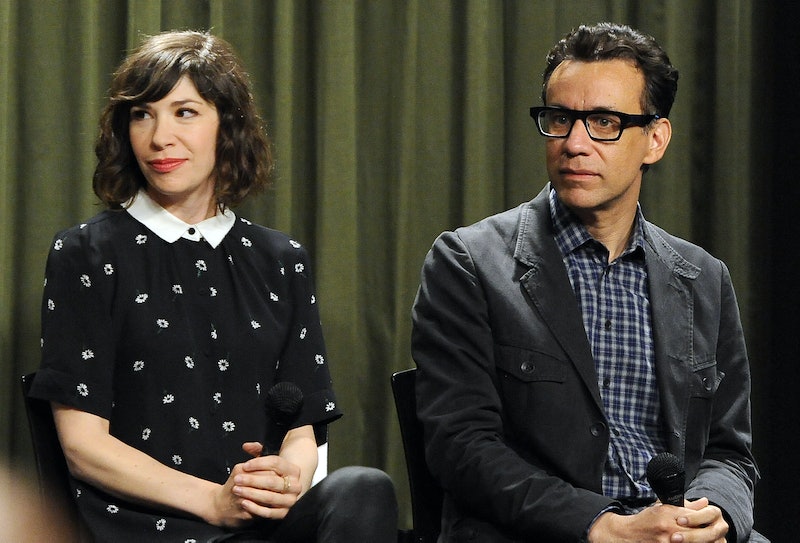 If you've ever watched the IFC sketch comedy show Portlandia, you've no doubt seen the feminist bookstore, In Other Words. The bookstore is based on and filmed in a real bookshop of the same name. But now it seems the real In Other Words bookstore has soured on Portlandia , even going so far as the hang a sign reading "Fuck Portlandia" in their window. So what happened?

Recently, people in the Portland area noticed something was amiss based on the fairly unambiguous sign in the window of In Other Words that read, "Fuck Portlandia!" in large red letters, with smaller bullet points below reading, "Transmisogyny – Racism – Gentrification – Queer Antagonism – Devaluation of Feminist Discourse." Which seemed to imply that the store had ideological problems with the show.

When the local news outlet, Willamette Week first asked for comment, however, the store was less than forthcoming, writing back: "After some consideration and research we've decided to officially tell the Willamette Weekly to go fuck themselves. Your paper has absolutely zero journalistic professionalism and you are scummy rape apologists."

However, they later posted their own blog post, also entitled "Fuck Portlandia," explaining their reasoning. According to the post, the current board and staff at In Other Words were not the ones who initially decided to let Portlandia film in the store, and they are less than pleased with the arrangement for a number of reasons, both practical and ideological.

In the post, In Other Words explains that the store is required to close for filming and that the flat fee they receive in exchange for letting Portlandia film on location does not cover profits they lose during those times. They say filming also inconveniences their neighbors, and the the many tourists and fans of the show who come to In Other Words rarely buy things.

They also take broader objections to the show itself. In a section with the heading, "The Show Is Bad," they write that "The Women and Women First segments that are filmed at In Other Words are trans-antagonistic and trans-misogynist and have only become more offensive as the show goes on." They also find Portlandia racially problematic, adding "Also: there are no Black people on Portlandia. ... Portland is white but it’s not that damn white." They continue on to explain that Black Lives Matter activists regularly use their space and that they have a Black Lives Matter sign in the window — which they allege producers asked them to take down during filming.

They also worry that the show is fueling gentrification in Portland. They write,

Fred and Carrie are on billboards and realtors have gleefully begun using Portlandia’s popularity and insipid humor (‘put a bird on it!’) to make displacing the communities that made Portland a great place in the first place something twee and whimsical for the incoming technocrat hordes. [Quote in the original.]

Bustle has reached out to both IFC and Portlandia for comment and has not yet heard back.

So is this the end of the Women and Women First segments on Portlandia? Will they simply find another bookstore to use for filming? Will other feminist bookstores be interested? Fans will have to wait and see.