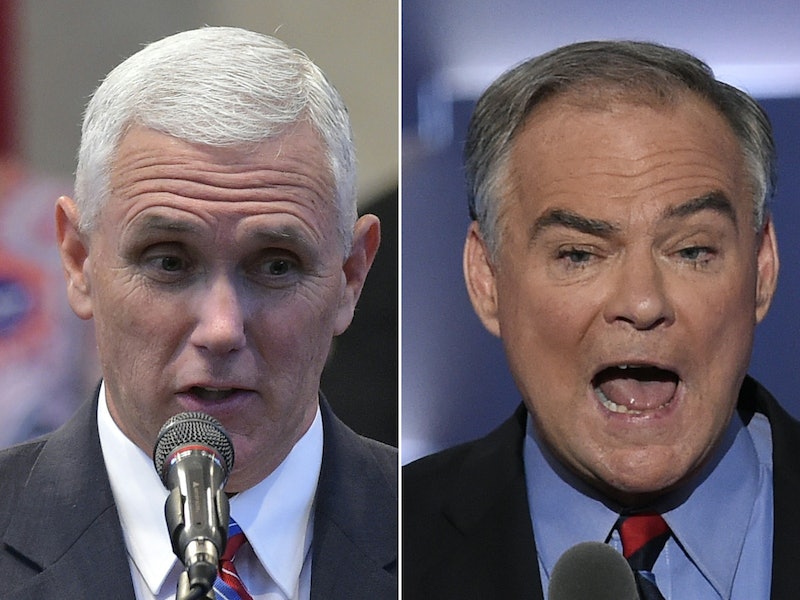 Amid an unrelenting onslaught of insults, Twitter fits, and supposed scandals surrounding Donald Trump and Hillary Clinton, vice presidential candidates Mike Pence and Tim Kaine have been largely overshadowed. And as the two are poised to confront one another in Tuesday's vice presidential debate, the event risks being ignored, coming one week after the first presidential debate, which garnered a record number of viewers. The debate may very well be "boring," especially compared to the jab-fest that was last week's event. But America needs a boring debate to recalibrate our sense of what politics actually are.

The temperature of the 2016 presidential race has been high since the very beginning of the primaries, when the tone was set to acerbic and the role of theatrics was solidified. It's time for a splash of cold water to the collective face, and Kaine and Pence might be just the people to deliver it. Kaine actually admitted to being "boring" after Clinton selected him as her running mate. Pence will likely play up his calm demeanor to offset the emotional sparkplug he's running with. Although they'll certainly be defending their running mates against attacks on Tuesday, we shouldn't expect much vitriol between the two.

What we can expect in place of cheap blows and efforts to elicit a chuckle or cheer from the crowd is policy talk. Sure, Clinton and Trump talked about their policy proposals during the debate, but what's more memorable? The intricacies of Trump's tax plan, or when he retorted, "Why not?" to Clinton's accusation that he blames her for everything bad that's happened? Kaine and Pence, for their part, might not give us such opportunities to watch the debate as a form of entertainment. They will, I hope, make us think. Not feel, not have knee-jerk reactions, but think.

Kaine and Pence will be taking the ropes down from what has become a wrestling ring and returning it to a debate stage. They have a chance to remind us that politics isn't only, or primarily, comprised of the jabs and the scandals. It is, first and foremost, a bunch of ideas and decisions that impact our lives, from our incomes to the food we eat to the air we breathe to the rights we do or do not have. It's easy for that to get drowned out by daily uproars around the latest offensive comment or dumb tweet. But it is, I hope, what will be highlighted at the Kaine-Pence debate on Tuesday. Bring on the "boring."