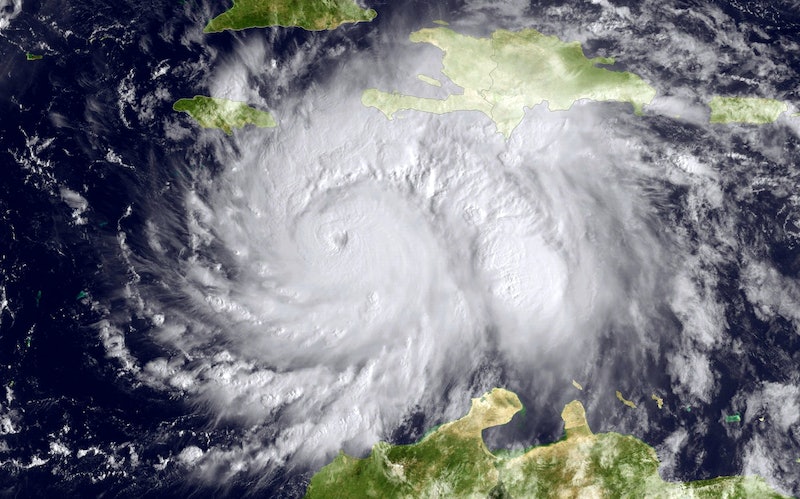 In the Atlantic, hurricane season is well underway, and Hurricane Matthew looks poised to cause serious damage throughout the Caribbean. The hurricane is currently a Category 4, and weather experts believe it will hit Haiti, Jamaica, eastern Cuba, and other parts of the Caribbean beginning soon and lasting into the weekend. Hurricane Matthew's impact on the United States is, for the time being, less certain, but its current path does appear to be headed toward the southeastern part of the country.

Torrential rains and heavy winds have already begun to damage countries in the Caribbean. Some disaster relief organizations have begun aid efforts, but unfortunately, things are only expected to get worse as the hurricane begins to move over the islands, possibly toward the U.S.

After the disastrous 2005, during which Floridians were hit by Category 5 hurricanes Wilma, Rita, and Katrina in a single season, the Sunshine State has largely avoided serious hurricane events. When Hurricane Hermine hit in September 2016, it was the first hurricane landfall since the brutal 2005 season.

Will 2016 pack another one-two punch of hurricanes in Florida or elsewhere in the United States? Hurricanes are famously difficult to predict far ahead of time, but here's what meteorologists are saying about the chances that Hurricane Matthew will make landfall in the United States and the sort of damage it might have in store.

According to USA Today, the two likeliest scenarios are a "coastal scrape" or a "direct hit." In a coastal scrape scenario, Hurricane Matthew would slide up the coast of the eastern United States without ever making landfall. It could occur close to the coast or hundreds of miles out, and would likely cause rain, waves, and strong winds if close, though this scenario would likely be the less damaging of the two.

A direct hit would, as the name indicates, involve direct, possibly severe landfall. USA Today indicated that the most likely location for a direct hit appears at this time to be South Carolina, though meteorologists also noted that the entire region between Florida and North Carolina would be at risk for severe weather. Residents of the region are encouraged to stay up to date about evacuation zones and proper protocol, should Matthew make landfall. The Today Show compared two methods of hurricane modeling for Matthew's potential path. Meteorologist Al Roker suggested that any U.S. landfall would possibly occur on Saturday morning.

Accuweather reported that Matthew is likely to diminish in intensity after it hits Haiti. It predicts that the hurricane will hit the remaining Caribbean islands at a Category 3 and continue to decrease in strength as it approaches the United States. This is not cause for total relief, unfortunately. The National Hurricane Center reports that even hurricanes categorized as 1 or 2 can still inflict enormous damage on the regions they hit.

The Category 4 damage in Haiti, sadly, is predicted to be "severe," and conditions are reportedly "life-threatening." The Haitian government has issued a "Red Alert" and has begun to move citizens to shelters, canceled schools, and closed the airport.

While anyone planning travel or seeking to protect their families in the southeastern United States must be eager to learn more about Hurricane Matthew, it is unfortunately impossible to predict its path with certainty. At this point, what does seem certain is that many people in the Caribbean islands will suffer enormous damage. Many international relief charities have already begun soliciting donations to help the victims of the hurricane.