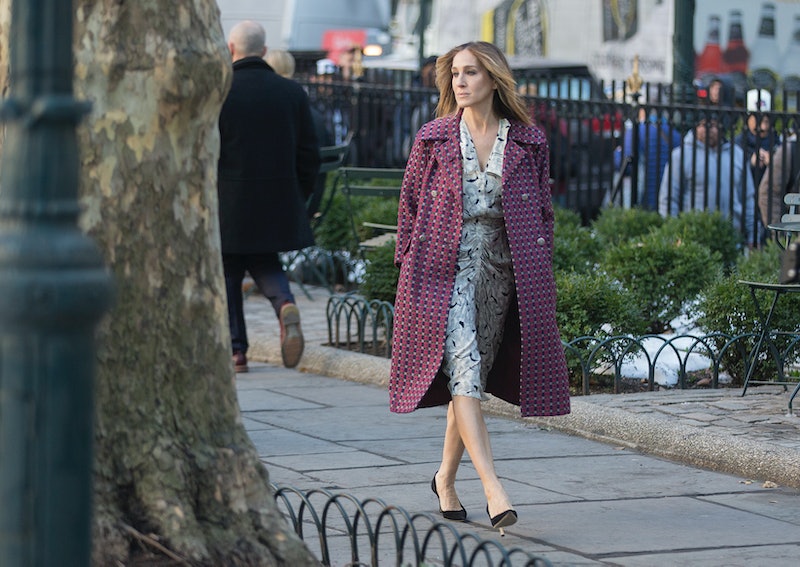 As a generation of people who grew up in the wake of the Sex And The City phenomenon, it's become habit to think of Sarah Jessica Parker and Carrie Bradshaw as one in the same. In fact, when I saw Parker and her IRL husband Matthew Broderick on the street in Manhattan a few weeks ago, I had to do a double take and remind myself that this wasn't a movie and she wasn't cheating on Mr. Big. As of Oct. 9, though, that's all about to change. That's when Parker's new series, Divorce, airs on HBO.

In her new role, we will not be seeing Parker buying $900 Manolos and living in a 600-square-foot one bedroom apartment in Manhattan on a freelance writer's salary (take it from someone who knows — it's not possible). Instead, we will see her in a totally new light: As a real, relatable woman who repeats outfits.

Parker will play Frances, a mother of two who's going through a difficult divorce from her husband, played by Thomas Haden Church (who you may recognize as the cool teacher in Easy A). It's meant to tell the complicated story of what happens when life gets in the way of love, which is decidedly different from Sex And The City, which often let love get in the way of life (that was my best attempt at a Bradshaw-ism).

To learn more about Frances — who, as Parker adamantly told the New York Times, is not "Carrie Bradshaw in the suburbs" — I spoke to the show's costume designer, Arjun Bhasin, about how fashion functions in the plot. After all, even if SJP isn't Carrie Bradshaw anymore, she is still one of the most stylish women in Hollywood.

Through the character of Frances, both Parker and Bhasin wanted to break free of what people had come to expect of the actress, at least style-wise, from her Carrie Bradshaw days. "We come to it with a really fresh perspective and bring to life a new character that didn't exist before," Bhasin tells me. "It wasn't really so much about following the footsteps of another show, or her, or what she's used to doing, but really a new identity and a new show that reflects the mood of what this show is about."

After all, Frances is a woman who has a lot more going on in her life than brunch with her besties and discovering an inventive way to wear a scarf. She's a real woman dealing with real issues (a divorce, among other things), and Bhasin wanted to make that very clear through the way she dresses. "She's really pared down in that way," he says. "She has a few basic, classic pieces that I feel like she relies on, that she goes back to again and again."

She wears her favorite pieces over and over, and has a few things in her wardrobe — a coat, a scarf, a bag — that she repeats daily, like any real woman (except maybe Carrie Bradshaw) would.

It was important to Bhasin to use Frances' clothing to illustrate that she was going through a major transition in her life. According to the stylist, when a person is experiencing a significant change, he or she reverts to the practical elements of what's going on in their lives instead of worrying about the excess. "You forget about, like, overly accessorizing and overly peacocking and getting dressed up to do things and you sort of think about 'What do I need to do to get through the day?" he says. "And so we see with her, with Frances, a lot of... there isn't a lot of, you know, fast changing on."

This is not, of course, to say that she doesn't look stylish AF (I mean, check out that coat) or mix prints like a total boss, just that she has more important things to worry about than changing her outfits between every scene.

Because the show starts at a crisis moment, Bhasin wanted to create a wardrobe for France that shows that she had a back story and has owned the items in her closet for a long time. "We tried to get away from sort of fast fashion and immediate fashion trends and go for a more vintage-y look, clothes that would create a sense of nostalgia rather than be trendy," he said. He drew style inspiration from the '70s, as well as women who, in his opinion, had mastered the practical-chic look, including Katherine Hepburn, Lauren Hutton, and Lauren Bacall.

"I think it's surprising to see Sarah Jessica in this kind of role," says Bhasin. "It is so relatable and is so exciting and it does have an immediacy that you can connect to at once, which I think is going to be the special thing about it."

Divorce premieres on Sunday, Oct. 9 on HBO, and I, personally, cannot wait.

More like this
Tilda Swinton’s Neon Yellow Hair Is More Than A Style Statement
By Justine Knight
These Are The Best Socks A Woman Can Buy
By Lisa Fogarty
The 2022 Emmys' Top Nail Trends
By Olivia Rose Ferreiro
How To Wear A Bucket Hat Like Rihanna, Dua Lipa, & More
By Allie Fasanella
Get Even More From Bustle — Sign Up For The Newsletter