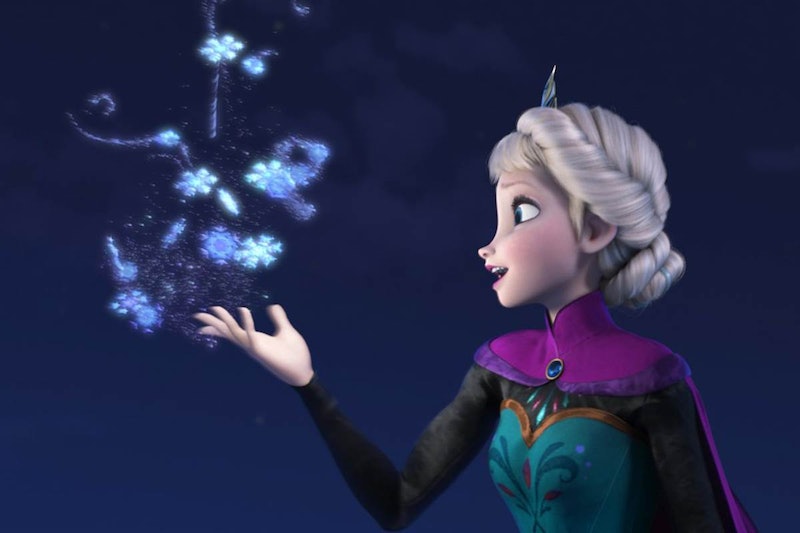 If there's one animated movie in recent years that's very close to fans' hearts, it's Frozen. Though we'll never get "Let It Go" out of our heads, one of the reasons why this film is so beloved is because it speaks to a very real human struggle. Elsa's self-imposed isolation is both devastating and totally relatable to anyone who struggled with feeling misunderstood. Elsa's sister Anna helps her realize that her ice powers are just another part of who she is, and it's that coming into her own that made some fans online suggest that, perhaps, Elsa's icy powers were actually a metaphor for her hidden homosexuality. Thus, the hashtag #GiveElsaAGirlfriend was born to encourage Disney to explore storylines for LGBTQ characters in the Frozen sequel. So what does Idina Menzel think about #GiveElsaAGirlfriend? Her response is brilliant... and will make you want a Peter Pan/Frozen crossover ASAP.

YouTuber Tyler Oakley interviewed Elsa's voice actor Menzel, along with Anna's voice actor Kristen Bell, on his Ellen Digital Network show, and both definitely have some thoughts about the famous hashtag. While Bell says she's totally fine with whomever Elsa would want to date, Menzel has some ideas about who Elsa could potentially date should the Frozen character open herself up to someone from any Disney property.

Though Menzel wouldn't reveal whether Disney is going to explore Elsa's love life in any regard, she did suggest a Disney woman that might be a good match for Elsa. Her matchmaking would involve setting Elsa up with feisty fairy Tinkerbell, and it definitely seems like a pair worth shipping. 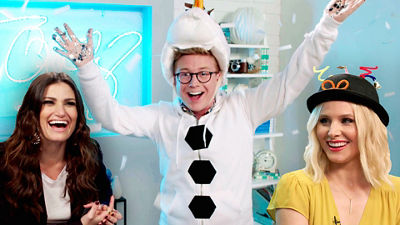 Think about it. Both Tinkerbell and Elsa know what it's like to be misunderstood (for Tinkerbell, it's more literal, since she can't speak at the same volume as her larger friends) and have magical powers that can both be an asset and a danger. They also tend to isolate themselves a bit, but in different ways: Elsa literally hides herself in an ice castle, while Tinkerbell tends to put people off with her silent-but-snarky attitude. (At least, in Peter Pan. The Tinkerbell that Disney presents in the fairies-based spinoff properties seems a whole lot nicer.) These women would definitely have things in common, so it's not totally ridiculous to start shipping them, despite the little crossover potential.

More important than Menzel's pick is the fact that she acknowledged the hashtag without writing it off as a baseless fan desire. There's a chance that Elsa won't receive a female love interest in Frozen 2 — or, perhaps, a love interest at all — but it's important that this concept is seen by the stars themselves as every bit as valid as giving Elsa a male love interest. Considering how few people would bat an eye if Elsa was given a princely boyfriend, the fact that Menzel isn't against Elsa having a girlfriend either is a step in the right direction. It shouldn't be controversial, but, instead, expected that we have lead characters of different sexual orientations. Just as we have a world filled with people who identify all across the spectrum of sexuality.

If Elsa doesn't get to be our first LGBTQ princess, hopefully this hashtag — and Menzel's acceptance of it — will inspire Disney to include more diversity within its leading ladies down the line. Until then, we'll just have to imagine what Tinkerbell and Elsa's first date might be like.

More like this
Twitter Is Unravelling Over Wolverine’s Return For 'Deadpool 3'
By Darshita Goyal
Everything You Need To Know About ‘Black Panther: Wakanda Forever’
By Bustle Editors
The 50 Most Powerful Characters In The Marvel Universe, Ranked
By Johnny Brayson and Nola Pfau
Lin-Manuel Miranda & Tituss Burgess React To 'Little Mermaid' Casting Backlash
By Radhika Menon
Get Even More From Bustle — Sign Up For The Newsletter