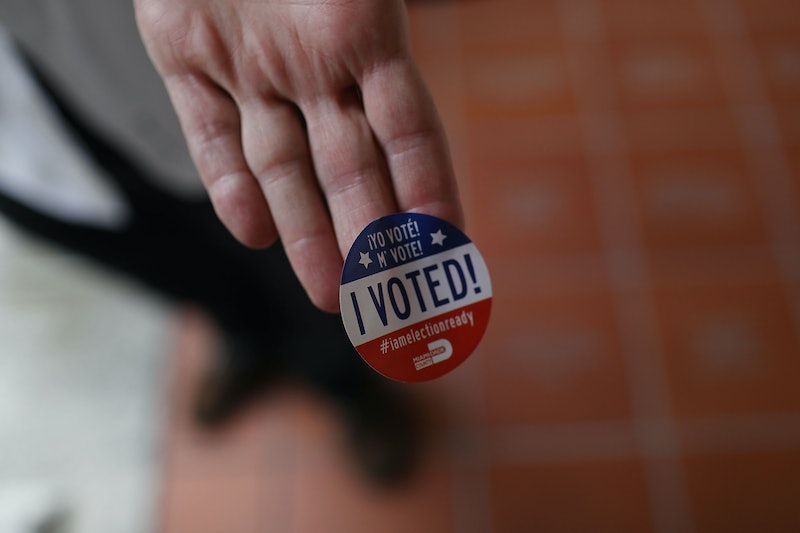 Whether the unusual situation of the 2016 election featuring two major-party candidates with dismally high unfavorability ratings inspires a greater or fewer number of people to show up at the polls is a question we won't have an answer to until after the Nov. 8 general election. Particularly pressing is the question of what young voter turnout will look like; this demographic consistently has the lowest turnout rate, but millennials could decide the election in 2016 — if they show up to vote. That's primarily because they are the most populous generation in the United States as of last year.

The Pew Research Center reported that millennials, those aged 18 to 34, overtook baby boomers, aged 51 to 69, in 2015. The disparity is rather small now, but Pew's projection shows that millennials will outnumber the second most populous generation by about 30 million people by 2050. By sheer numbers, millennials are in a position to make a huge impact on the election, but they might have to defy history in order to do so: Census Bureau data puts their turnout rate (or, at least, the rate for those between 18 and 24) during presidential elections consistently below 50 percent, whereas rates for 45- to 64-year-olds and those 65 and older can push 70 percent.

Just how millennials could tip the election is the real question. In another Pew survey from August, young people favored Hillary Clinton over Donald Trump, and vice versa for the over-50 crowd. Then again, more young voters were aware and supportive of third-party candidates than older voters: A full 19 percent of under-30 respondents expressed support for Libertarian candidate Gary Johnson and 9 percent for the Green Party's Jill Stein, compared to 9 percent and 2 percent, respectively, among younger boomers (it was only 4 percent and 2 percent among those 65 and older).

Recent polling shows that, when comparing two-way races between Clinton and Trump to four-way races that include Stein and Johnson, both major-party candidates lose a roughly equivalent percentage of support. But in order to have strong leads in swing states, Clinton will need those young voters, who traditionally go Democratic, to turn out for her in good numbers. According to The Atlantic, a number of polls including swing-state millennials show her in a clear lead among the demographic, but with rather underwhelming levels of support just below 50 percent.

Along with the result of the presidential race, we can't neglect the importance of down-ballot elections as well. Millennials are the most liberal generation, according to another Pew study; if they show up in droves in November, the Republicans may lose their Senate majority. The Democratic caucus need to gain five seats in the Senate to take control of it.

However they vote in November, young voters have the opportunity to make a big impact on the results of the election, whether it's by boosting Clinton to a solid win or by sparking some serious soul-searching within the major parties by casting their ballots for third-party candidates in large numbers. Either way, as the most populous generation that will be around for a long time to deal with the ramifications of the 2016 decision, young voters should take the opportunity to weigh in.