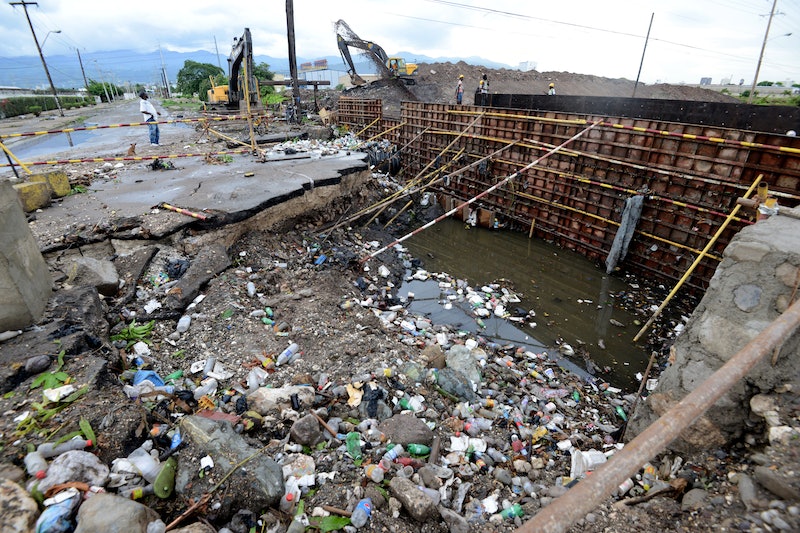 Over the last several days, Hurricane Matthew has battered the Caribbean, causing widespread damage and even loss of life from the eastern Caribbean to Colombia. On Monday, Jamaica, Cuba, and Haiti prepared for the storm to make landfall. With countless hours of recovery ahead, it's important to know how to help the Hurricane Matthew victims before conditions get any worse.

As of Monday, at least three people had died as a result of the category 4 storm. One death occurred in Haiti, one occurred in Colombia, and one in Saint Vincent. A second death in Haiti had been initially reported, but was not confirmed. Haitians fell particularly victim to the massive storm, as the island nation remains the poorest country in the Western Hemisphere and is still rebuilding infrastructure after a catastrophic earthquake in 2010. According to the World Food Programme, 50 percent of urban Haitians are unemployed, and fewer than 50 percent of Haitian households have access to safe water.

The conditions in the region reportedly contributed to much of the damage and destruction caused by Matthew. For instance, fishermen took riskier trips because of the urgent need to support their families and many residents found it difficult to take adequate shelter from the storm. As Matthew continues to pose a threat in the Caribbean, the need for help on Monday — and beyond — is widespread.

On Monday, crowdfunding site GlobalGiving announced its Hurricane Matthew fund to benefit the storm's victims. The fund will support preparation efforts in the area and local first responders. Donors can give by going online or by texting GIVE MATTHEW to 80100 to donate $10.

Give To The St. Boniface Haiti Foundation

The St. Boniface Haiti Foundation (SBHF) offers various medical services throughout Haiti — and its work becomes increasingly urgent in times of natural disasters. In the wake of Hurricane Matthew, SBHF has started collecting donations for its St. Boniface Hospital in Fond-des-Blancs in southern Haiti. Donors can give to SBHF online.

Take In A Foster Animal

Although most of Matthew's current damage has remained centralized in the Caribbean, parts of the United States are already preparing for a strong storm on American soil. A Pollocksville, North Carolina, animal rescue service has called for temporary foster homes for its dogs and cats. According to AccuWeather, Matthew could affect the middle of the East Coast as early as Wednesday.

A Christian organization with more than 60 years of experience responding to natural disasters, MAP International was preparing on Monday to send supplies to Haiti. MAP works in the United States and abroad, but its Hurricane Matthew plans include delivering medical supplies, such as vaccines, to the affected areas in the Caribbean. Donors can give to MAP online via credit card or PayPal.

According to a Facebook post from a blog called The Haitian American, The Man Dodo Humanitarian Foundation began collecting supplies for Haiti's relief effort on Monday. Man Dodo is a registered nonprofit organization that coordinates volunteer efforts between the U.S. and Haiti. Monetary donations to Man Dodo can be made online, but The Haitian American blog recommended sending supplies to Man Dodo's office in Miami.

The fundraising platform CrowdRise has created a page dedicated to providing relief for Hurricane Matthew victims. Organizations listed on its page include Salvation Army, UNICEF, the Sandals Foundation, and the Center for Disaster Philanthropy. You can take a look at the entire list here.

Conditions in the Caribbean may get worse before they get better as Hurricane Matthew continues to wreak havoc. Americans who might find themselves in the strong storm's path soon enough should start to prepare. Meanwhile, those looking for a way to help can look to a number of charitable organizations and local volunteer groups.