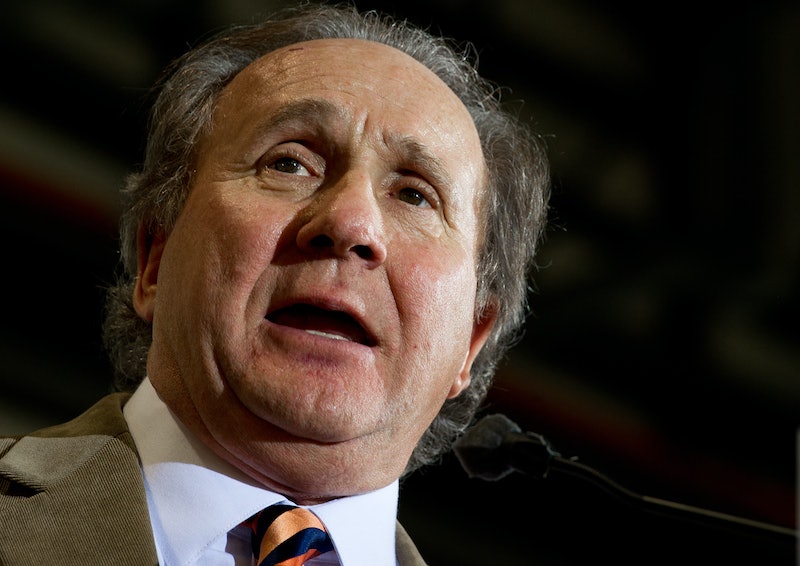 Donate a mere $100 to Donald Trump's presidential campaign and you can be the proud owner of a "special edition print" of Ronald Reagan. Trump, like just about every Republican presidential candidate of the last 20 years, has sought to depict himself as the heir to the famous Republican's throne. But that plan hit a bump late Sunday when the 40th president's son Michael Reagan retracted his endorsement of Trump, adding that Nancy Reagan would vote for Hillary Clinton if she could.

Reagan's support of Trump has been tenuous at best. During the Republican primary, he said that there's nothing "Reaganesque" about Trump, and insisted that his father would not have voted for the reality TV host if he were alive in 2016. Nevertheless, Reagan endorsed Trump in July, conceding that it was "time now to support the Nominee of our Party."

Now — as evidenced by a late-night tweet storm — Reagan is back to opposing Trump. The straw that broke the camel's back, apparently, was Trump's recent suggestion that Clinton has been unfaithful in her marriage to Bill, a suggestion made without evidence or provocation. This compelled Reagan to pull his support for Trump, calling the remarks "garbage" and condemning RNC chair Reince Priebus for supporting a man who would say such a thing.

Reagan isn't the only one to endorse, and then unendorse, the real estate tycoon. Illinois Sen. Mark Kirk — one of the few remaining moderate Republicans in the Senate — retracted his endorsement of the GOP presidential nominee in June after Trump suggested that a Mexican judge couldn't rule in an unbiased manner due to his "heritage."

On the complete other end of the spectrum, we have James David Manning, the gay-bashing pastor from Harlem who accused Obama of orchestrating the attacks of Sept. 11. Manning endorsed Trump in December, but pulled that endorsement after the shooting in Orlando. The problem, Manning explained, was that Trump had depicted Muslims as the enemy when, in fact, the real enemy is gay people. His reasoning is grossly flawed, to say the least, as neither gay people nor Muslims are the enemy.

Manning is, of course, coming at this from the complete opposite viewpoint as Kirk and Reagan. But all three of these cases effectively illustrate Trump's biggest challenge in this election: He needs to grow his support in order to win, but he cannot do this without alienating his base. Likewise, Trump's attempts to appease his base effectively turn off the moderate voters he needs to win in November. So, when Trump gives voice to the nativist, bigoted sentiments of his farthest right-wing supporters, he loses the support of folks like Kirk and Reagan. But when he tries to appeal to the broader electorate by saying conciliatory things about LGBT people, he loses the support of folks like Manning.

It's a no-win situation, and it goes a long way to explaining why Trump could lose this election. And as Trump continues digging himself into a deeper hole, it's unlikely that Reagan will be the last Republican to withdraw his support of the divisive candidate.