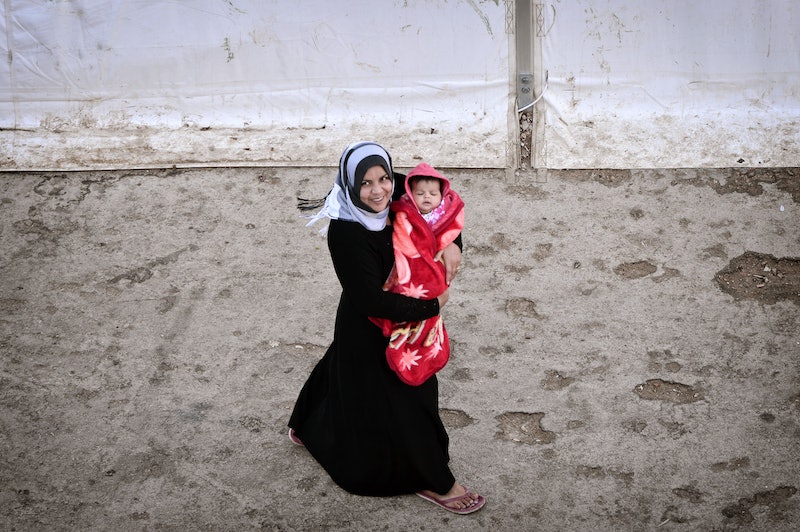 An attempt by Republican vice presidential candidate Mike Pence to block Syrian refugees from resettling in Indiana has failed — and this isn't the first time. On Monday, a federal appeals court unanimously voted to once again uphold the injunction against Pence's effort to block Syrian refugees from settling in Indiana. And in a surprising twist, the group that ruled against Pence's policy includes potential Donald Trump Supreme Court pick Judge Diane Sykes. Now that the court has had its say, Pence should reconsider his discriminatory claims against innocent refugees looking for a new home in the states.

It started back in November 2015 when Pence suspended Indiana's participation in the resettlement of Syrian refugees, pointing to a supposed refusal by the Obama administration to "address gaps in the screening of Syrian refugees." But the Indiana governor didn't count on being sued by the American Civil Liberties Union of Indiana and resettlement agency Exodus Refugee Immigration. The lawsuit put forth that Pence "acted illegally in accepting federal money for refugee resettlement and then refusing to use that money to aid Syrian refugees," NPR reported.

When the judge ruled against Pence, the governor appealed the decision and responded by attempting to justify his reasoning. "As governor I have no higher priority than the safety and security of the people of Indiana. During these uncertain times, we must always err on the side of caution," he said. "For that reason, following the terrorist attack in Paris and the acknowledgment by the Director of the FBI that there are gaps in the screening for Syrian refugees, I suspended participation by the State of Indiana in the Syrian refugee resettlement program and I stand by that decision." That appeal was blocked on Monday when the initial ruling against Pence was withheld.

During the ruling, Judge Richard Posner summed up why Pence's policy is discriminatory, writing that Pence's statements were the "equivalent" of wanting to "forbid black people to settle in Indiana not because they're black but because he's afraid of them, and since race is therefore not his motive he isn't discriminating. But that of course would be racial discrimination, just as his targeting Syrian refugees is discrimination on the basis of nationality."

Unfortunately, Pence isn't alone in his view on Syrian refugees; his running mate Trump has called refugees a "Trojan horse" and proposed suspending immigration from Syria and Libya, according to The Guardian. This seems to even be in line with the attitudes of some of his supporters. According to a Pew Research Center survey on foreign policy attitudes, 85 percent of Trump supporters said refugees are a major threat to the United States, compared to 40 percent of Hillary Clinton supporters.

The Federal Appeals Court was right to rule against Pence's irrational method of policy-making. More than 170 Syrian refugees were settled in Indiana in the last fiscal year, according to court documents, and none of them have been known to have threatened the safety of Indiana's residents. As Elizabeth Dunn, a professor at Indiana University, told the Indianapolis Star: "You could say, well, America has the KKK, or the Oklahoma City bombers, but would you paint all Americans with that brush? We shouldn't do that to Syrians, either."

Dunn makes a good point. And both Pence and Trump — as well as the dozens of other governors who sided with Pence — should take note.