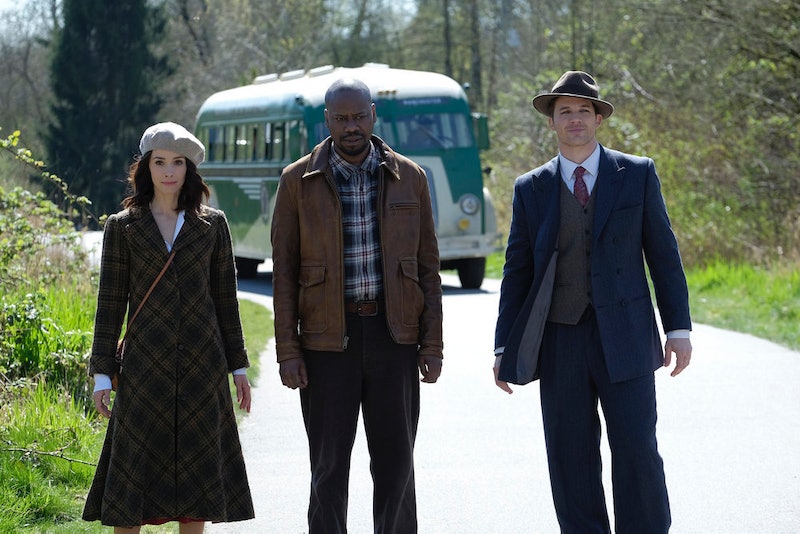 NBC's Timeless premiered on Monday night and presented a different take on time travel. A historian named Lucy (Abigail Spencer), Wyatt the solider (Matt Lanter), and scientist Rufus (Malcolm Barrett) are a time-traveling team tasked catching villain Garcia Flynn and not changing history too much. But the series also shows that history wasn't always perfect, through the eyes of Rufus, who is black. In Monday night's episode, Rufus' Black Lives Matter-inspired monologue on Timeless is moving and shows that race relations have been a significant issue across time.

Lucy, Wyatt, and Rufus travel back to 1937 to witness the Hindenburg disaster, but Rufus voiced his concerns early about traveling to the past. "I don't know what it's like across the pond, but I'm black," he says. "Literally no time in American History was awesome for me." But being the brilliant scientist that he is, he takes on the mission, even though it's understandably awkward for him. In segregated 1937, Rufus has to ride in the back of a bus (which he sarcastically remarks as "awesome") and he is instructed to avert eye contact with anyone in a bar. These moments brought some realism to the time traveling fantasy, but the most telling moment came when Rufus, Wyatt, and Lucy end up in jail.

Wyatt asks Rufus, who is placed in a separate cell, to distract the police officer in the room, so Wyatt can steal Lucy's bra underwire for his escape plan. Rufus does so with an impassioned speech regarding the officer's constantly referring to him as, "Boy." "I'm not a child and I'm damn sure not your son," Rufus begins. "So don't call me boy." And he continues, talking about the future achievements of African Americans. "I'm in the damn stone age, but I hope you live long enough to see Michael Jordan dunk, Michael Jackson dance, Mike Tyson punch," he says. "Really any black guy named Michael. OJ, yeah, he gets off. He did it, but we don't care. And Obama, he's the president. 2008, that's going to suck for you." He ends by saying, "The future is not on your side, boy."

The officer leaves and returns with back up, ready to attack Rufus, but Wyatt and Lucy escape with her underwire and knock out the cops. Timeless showrunner Eric Kripke tweeted that Barrett had ad-libbed most of that inspiring speech.

While Rufus may have a challenging time with the past on Timeless, this showed his is more than equipped to bring some change.

Watch the moving moment in the video below.