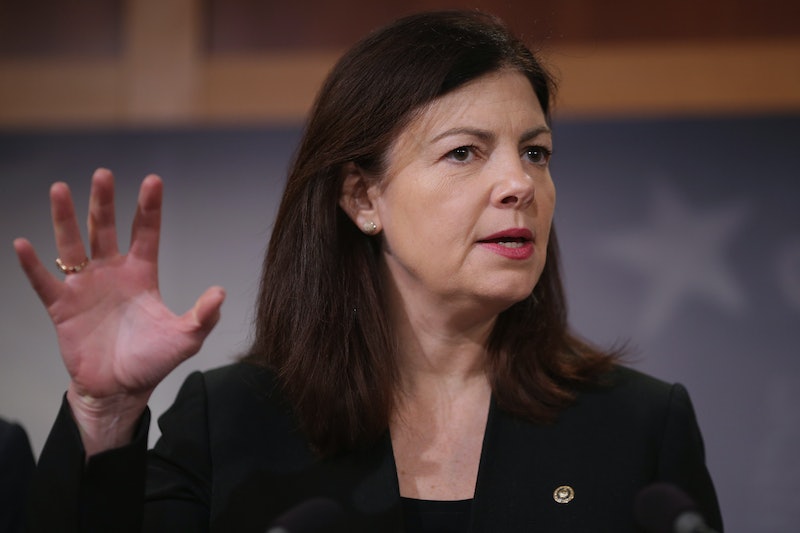 Hold up, she didn't mean it. At least that's what New Hampshire Sen. Kelly Ayotte wanted to get across with her statement trying to retract her debate comments from Monday night. The Republican senator briefly said that Donald Trump makes a good role model, "absolutely" was the wording. It didn't take long to backtrack that statement, but in the end it's all still pretty confusing.

On Monday night, she and her Democratic opponent, Gov. Maggie Hassan, were sparring at a debate when she was asked if she thought Trump would serve as a role model. Ayotte deferred saying that she would encourage children to follow their dreams and to run for president. The follow-up was a bit more specific, "Would you tell them to be like Donald Trump?" After sighing a few times she said, yes, she would: "I think that certainly there are many role models that we have and I believe he can serve as president, and so absolutely I would do that."

It wasn't long before she was attacked on Twitter, with several noting Trump's attacks on women this past week, past extreme statements, and the news that he may not have paid taxes for up to nearly 20 years — after all, kids don't pay taxes either.

After facing online backlash for her comment, she issued a new statement indicated that she "misspoke." She released a statement on Twitter shortly thereafter doing her best to backtrack: "I misspoke tonight. While I would hope all of our children would aspire to be president, neither Donald Trump nor Hillary Clinton have set a good example and I wouldn't hold up either of them as role models for my kids."

So here's where it gets rather confusing. Instead of just acknowledging that Trump wouldn't be the best role model, she threw Hillary Clinton under the bus to confuse the conversation. It's kind of like a page out of Trump's playbook, saying something outrageous and then claiming it was a misstatement. But this isn't the first time she's left voters scratching their heads.

The mixed messages started way before the senate debate Monday night. Back in May she said she would support the nominee, but that she wouldn't endorse anyone — even though she plans to vote for Trump. Then in August she said that she will stand up to Trump in an attempt to distance herself a bit more:

I will take on my own party. I really believe that this is a big issue in this race — that I am the one candidate that will stand up to whomever is in the White House to do good things when we can work together — also when it's wrong to stand up to them.

So if you're looking for a clear repudiation of Trump, you're not going to get it from Ayotte. New Hampshire's Republicans supported Trump in the state's primary, even though the state voted for Obama in 2008 and 2012. As a result, the senate race between Ayotte and Hassan is one of the closest in the country. With Trump being such a huge influence this year, Ayotte's position on him may count for a lot.