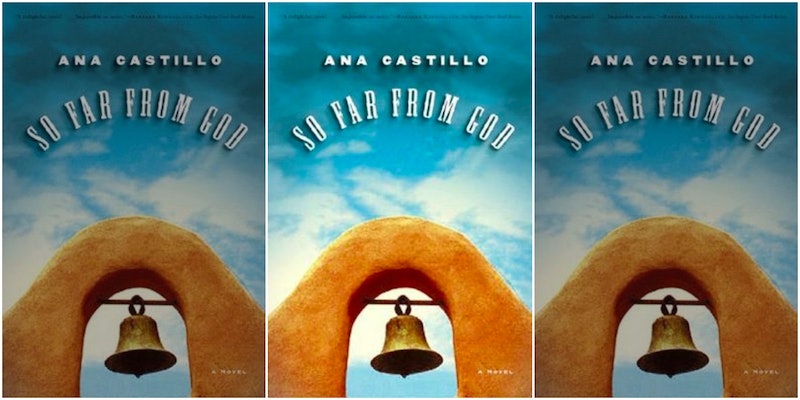 If you loved the Sisterhood of the Traveling Pants, but you’re craving a book that’s a little darker, I have the perfect suggestion for you: Ana Castillo's novel So Far From God. It's a novel that's deeply connected to the social issues of our time, a novel that refuses to give simple answers to tough questions, and a novel that amplifies the voices of the women we too often don't hear about.

It chronicles four sisters living in modern-day New Mexico, each offering their own perspective on Chicana life amidst some unexplained miracles. But the magic in this book doesn't limit itself to a pair of pants. This book has resurrections and characters who return from Heaven and Hell. Really, this book is magical realism at its best.

On the other hand, despite the magical happenings, the sisters themselves are full, realistic characters who don’t settle into stereotypes. As with the friends of The Sisterhood of the Traveling Pants, these four sisters find strength in their differences. You’re bound to identify with at least one of them. There’s the shy and kind one, the beautiful and bold one, the practical and ambitious one, and the smart and rebellious one. So, let's find out which of these fine ladies speaks to you most.

The youngest sister's name is La Loca. It's her nickname, but no one remembers her real name after her death and resurrection at the age of three (don't worry, no spoilers here — this all of this happens in the first few pages). She came back to life during her funeral and proclaimed that she had been sent back to pray for the community. And from then forward, she despises human touch, but feels a strong kinship with the farm animals that she cares for. If you're an introvert, you will certainly find a kindred spirit in La Loca.

Fe is the middle sister, and also the practical, logical one. Fe prides herself on her stable job at a bank, her long-time fiancé, and her ambition, which she feels sets herself apart from the "self-defeating" attitude her sisters sometimes display. Then Fe's fiancé abruptly ends her relationship, which shifts Fe's entire worldview. Everyone who's experienced a break-up that forced them to reexamine their life journey will find comfort, anger, and humor with Fe.

Eldest sister Esperanza has a surprising combination of wanderlust and smarts. Amidst her wild twenties she went to university and got a B.A. in Chicano Studies, then started working for a news station as an anchor. When her ex-boyfriend from university, Ruben, pops back into her life she begins to feel a restlessness again, especially about their relationship as "casual friends" and lovers. She also describes her past religious struggles: converting from Catholicism, to Atheism, to an Indigenous religion Ruben tells her about, to an unhealthy obsession with self-help books. If you're in constant search for meaning and self-fulfillment, Esperanza is your girl.

Caridad is the most beautiful of the sisters — goddess-like in both her figure and her face. She is a selfless sister, but not a bad person. I won't give away any spoilers, but Caridad experiences something that dramatically changes the direction of her life. The pain and tragedy of her story is heartbreaking. But her ability to rise above her circumstances and forge a different future for herself is inspiring.