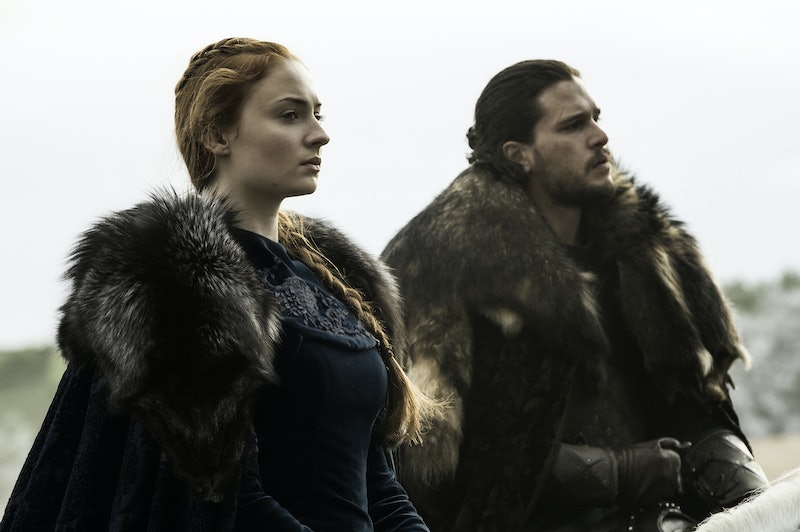 The new season of Game Of Thrones may not premiere until next year, but fans are already trying to get their hands on GOT Season 7 spoilers. And it seems they've succeeded — at least, a little bit. Watchers On The Wall is reporting that Game Of Thrones is adding a new female character into the mix, this according to new set photos. The newest cast member of the already full show was first reported to be the body double of Sophie Turner's Sansa Stark, but, with a little digging, the fan website found that the newest redhead on set was actually 19-year-old actress Megan Parker. The Brit, who has appeared on the hospital drama Holby City, fits the bill of a recent casting notice looking for a 16-year-old Northern girl character that “a high-stakes scene with leading cast members," which would explain why she's been seen hanging out with Kit Harington (Jon Snow) on set.

While, none of this has been confirmed — Parker tweeted the Watchers On The Wall casting story with a monkey covering its mouth and a four-leaf clover, but no further explanation. The website guessed Parker could be playing Alys Karstark. Now, who is Alys Karstark?

In George R.R. Martin's books, Alys is the only daughter of Lord Rickard Karstark, who was killed by Robb Stark for killing Lannisters. This is Lord Karstark's fate in both the books and the show, which he appears in the first three seasons of the show, only to be beheaded by Robb for treason. The forces of the House Of Karstark, which was founded by a Stark of Winterfell, end up leaving Robb to fight on his own. The Karstark name isn't spoken again until Season 6, when Rickard's only living son Harold tells the Boltons that he will never fight on behalf of the Starks again after what they did to his father. This is despite the fact that Harold's brother, Roose, already avenged his father by killing Robb at the Red Wedding.

While the Watchers On The Wall point out that Harold fought side-by-side with the Boltons during the Battle of the Bastards, it's unclear of his fate after that fight. If Harold did die offscreen, Alys, who has gone unmentioned throughout the show, would be the only living Karstark heir. And she likely would be someone that Jon Snow would like to make amends with. He is going to need all the help he can get to win back the Iron Throne, after all.

In the books, Alys comes to Jon Snow looking for protection from her cousin once removed, Cregan Karstark, who is looking to take control of the House and will likely kill her after she gives him an heir. It's hinted that this is something Cregan has done before to his last two wives. Jon Snow offers his help by having Alys marry Sigorn, the Magnar of Thenn, which are the most civilized group of free people. The Thenns are a group that hasn't been discussed on the show, despite some Redditors wondering why that is, since that this marriage helps form House Thenn, which becomes known for its savage fighters south of The Wall.

The addition of Alys in the upcoming season of Game Of Thrones could all be a way to establish Jon Snow's army. Most likely, this would be by bringing in the Thenns, but others on Reddit also wonder if Alys will now be paired off with wilding leader Tormund to establish a new house that the creators of Game Of Thrones are using just for he show. Either way, Alys being the key to expanding Jon Snow's army would explain why a Northern girl would be needed for a "high stakes" scene. There's nothing more high stakes than discussion of alliances between Houses at a time of battle.

Knowing that HBO's version of Game Of Thrones has differed from Martin's series, there is a chance that the Alys of the books will not be the one on the show, or that this new Northern character is not Alys at all, but instead from another house. Either way, in the months leading up to the Season 7 premiere of Game Of Thrones, there are going to be a lot of theories about who this new female character is. You may want to get in on it.