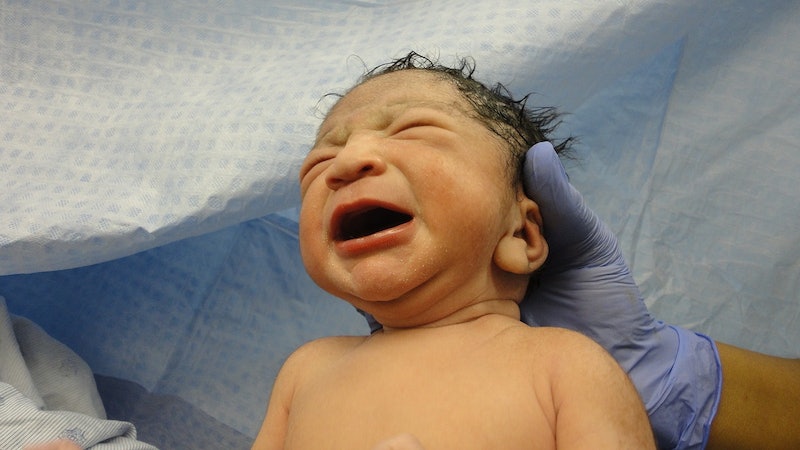 You’re probably already well aware that healthcare in the United States is a giant, confusing, expensive mess, but an image of a hospital bill posted to Reddit yesterday seems to perfectly encapsulate the problem. The bill shows that a hospital charged a couple to hold their own baby after a C-section. Just how much does it cost to hold your own kid after giving birth? Forty bucks, apparently.

On Monday, redditor halfthrottle posted a bill he received from the hospital after his wife delivered their son via C-section. The $13,000 bill (I know, $13,000! To have a baby!) lists a number of charges, including the surgery and a lactation consultation. Tucked in there for $40 is an item listed as “skin to skin after C-sec.” “During the C-section the nurse asked my wife if she would like to do skin to skin after the baby was born. Which of course anyone would say yes too,” halfthrottle explained.

“Skin-to-skin” refers to the practice of placing a new baby directly on his or her mother’s body immediately after birth in order to promote bonding and breastfeeding. “I was able to hold the baby on my wife's chest,” halfthrottle recalled. “Her arms were tied to the table and the nurse was there to remind me not to let go so the baby didn't fall. She actually took my camera from me and started snapping pictures for me. It was a positive experience for sure.” For his part, halfthrottle seems more bemused than outraged by the hospital charge, writing, “Everyone involved in the process was great, and we had a positive experience. We just got a chuckle out of seeing that on the bill.”

The original Reddit thread has more than 11,000 comments, with many people expressing anger at the idea of being charged to hold your own baby. Unsurprisingly, much of the conversation also hinges on the differences between the respective healthcare systems of the United States, Canada, and Europe. However, a few redditors have chimed in with possible explanations for the charges. One commenter suggested that the charge for skin-to-skin contact might simply have been a matter of documenting what happened during the birth, while redditor FiftySixer wrote,

As a labor and delivery nurse, I can kind of explain this. I didn't know that hospitals charged for it, but doing ‘skin to skin’ in the operating room requires an additional staff member to be present just to watch the baby. We used to take all babies to the nursery once the NICU team made sure everything was okay. “Skin to skin” in the OR is a relatively new thing and requires a second Labor and Delivery RN to come in to the OR and make sure the baby is safe.

This explanation coincides with the advice given by Dr. Raylene Phillips in a 2013 article about skin-to-skin contact. That article suggests that a nurse will need to make special precautions when setting up a mother for skin-to-skin contact with a new baby in an operating room, and will need to remain on hand to monitor the pair. These extra safeguards make sense when you consider that, in a post C-section situation, the mother’s arms may be fully or partially strapped down, and she is technically still undergoing surgery as her baby lies on her chest. (Halfthrottle, for example, says that their skin-to-skin contact occurred while his wife was still being stitched up.) Nevertheless, it’s jarring to see a hospital charging for the right to hold one’s own baby, especially because research suggests that skin to skin contact after birth is beneficial to infants’ ability to breastfeed and to their overall health.

We don’t need to paint this hospital as evil or as deliberately trying to scam its patients; there may be valid reasons for a charge like this one. But, as Sarah Kliff at Vox points out, this bill with its seemingly ridiculous charge does illustrate just how obscure and confusing healthcare billing can be. In a country where medical bills send many people into bankruptcy, transparency in healthcare costs is incredibly important.