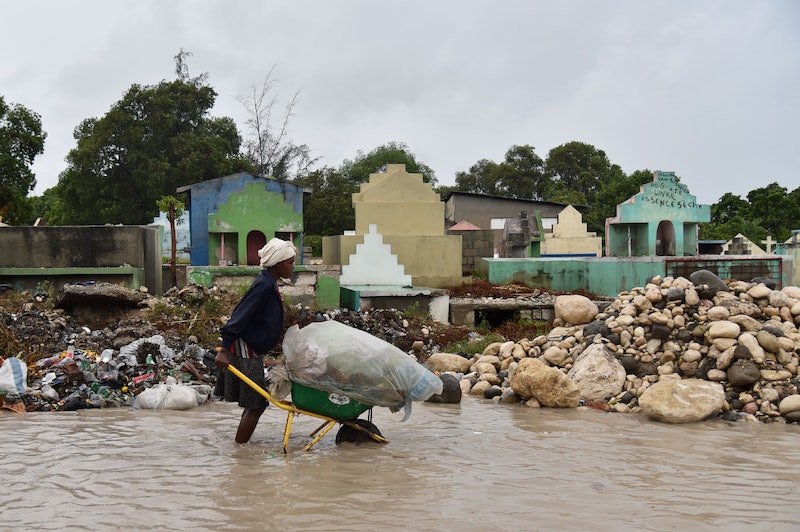 As it crashed onto the Tiburon Peninsula in the early morning on Tuesday, Hurricane Matthew forced thousands of Haitian residents to evacuate their homes. In light of this, the strongest storm to hit Haiti in decades, the government is facing significant challenges in directing the general population to safe shelters. While over 9,000 Haitians have been evacuated, the number of people needing protection is in the hundreds of thousands — and one photo of a woman leaving her home with her child is a striking example of that.

Some of the major challenges are the infrastructural issues which are preventing an effective evacuation process. While President Jocelerme Privert said that the country's 1,300 shelters have the capacity to house up to 340,000 people, a huge number of people are finding themselves unable to reach these shelters due to a lack of transportation. Frederic Hislain, mayor of Cité Soleil, a particularly poor area with over 500,000 residents, insists his people need buses to reach any shelters. After spending days pleading with the government to help provide the necessary transportation, all he's received is silence from the mayor of Port-au-Prince and a rejection from the mayor of Delmas.

Though Haiti received billions of dollars in aid after the 2008 earthquake, the actual implementation of these funds to rebuild communities, provide healthcare, and generally improve the quality of life in the nation has been plague by bureaucratic roadblocks in the United Nations and corruption within the Haitian government. This lack of finances has inevitably led to a lack of resources. Several mayors and government officials have found themselves warning communities about the impending storm for days, only to be scoffed at when they prove unable to provide these residents with a way to actually reach the safety of a shelter.

Adding to the difficulty is resistance by the people themselves. As reported by Reuters, many of those living in the city of Les Cayes refused to move to shelters out of fear that their homes would be robbed while they are absent. There is also the matter of residents doubting the weather forecasts predicting Matthew's serious impact on Haiti.

The number of fatalities attributed to Hurricane Matthew is at least six, spread throughout Cuba, Colombia, and Haiti. How damaging the storm will be for the country has yet to be seen, but forecasters expect to see serious impact. With an inconvenient mountainous geography that results in massive flooding, and with a population already struggling with a cholera epidemic, Haiti is expected to face some big challenges after this storm.

Looking back at the woman shown in this story's photograph, I can only hope that she and her child managed to reach a safe place. While the best-case scenario, both for these two people and for Haiti as a whole, is that Hurricane Matthew causes the least destruction possible, the international community must be willing to provide some aid.