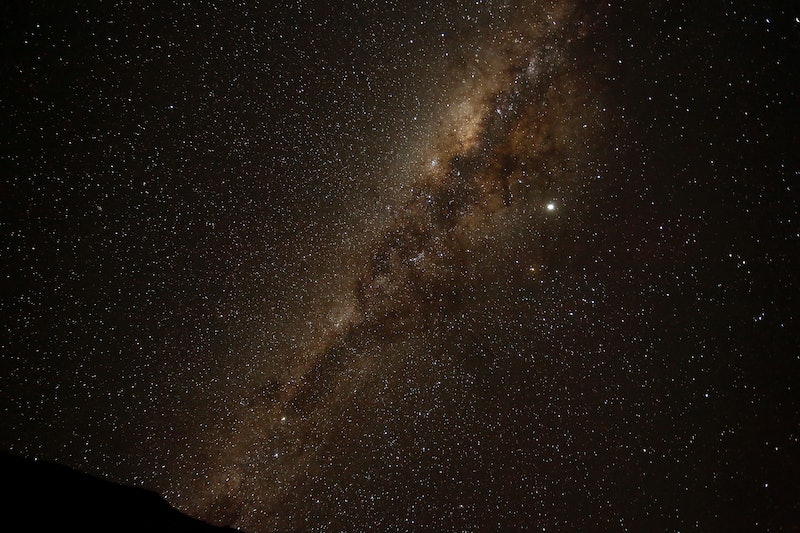 Every so often, scientists discover something odd happening in outer space — a body orbiting backward, or an Earth-like planet, or the evidence of water and microorganisms. The latest news revolves around a star that seems to be losing its shine: What's known colloquially as the "megastructure star" is dimming, and scientists have yet to find a likely explanation. It's weird. Very, very weird.

It started last year, when astronomers found that, the star, officially called KIC 8462852, was behaving strangely, according to the Independent. Totally uncharacteristic of this kind of star, its brightness has been fading over the last several years. In fact, there are records of the dimming dating back as early as the 19th century. A more recent study out of the Carnegie Institute in Washington, D.C. also found that not only has it been fading over the last several years, but it's fading fast, dimming two percent in the last six months alone. The most mysterious part, however, is that the Carnegie Institute researchers still can't explain it.

While both of these ideas might explain the sudden dimming, they do not explain the fading over the last several years. So there must be more to it.

The star's behavior is so bizarre that many have explored the option that there are aliens behind it. After all, astronomers examined 500 stars in the general area, and they couldn't find anything else even similar to it. So what are these aliens up to, you ask? Why, they've built a Dyson sphere, of course. A Dyson sphere is a megastructure built around a star to harvest its light (hence the nickname "megastructure star"). The concept was first introduced by theoretical physicist Freeman Dyson back in 1960 — and ironically, it's the only explanation that makes sense at this point.

While most experts aren't quite ready to except aliens as the reason behind the star's strange fading, it's still exciting to think about other intelligent life out there, being cool and harvesting light and stuff. You know. The usual.

More like this
These 25 International Horror Movies On Netflix Prove Fear Is A Universal Language
By Bustle Editors
‘Squid Game’ Creator Hwang Dong-Hyuk Just Dropped A Major Season 2 Tease
By Brian Anthony Hernandez and Bustle Editors
Here’s Your Daily Horoscope For September 27, 2022
By Mecca Woods
10 Stranger Things-Inspired Halloween Costumes For True Fans
By Emma Carey
Get Even More From Bustle — Sign Up For The Newsletter