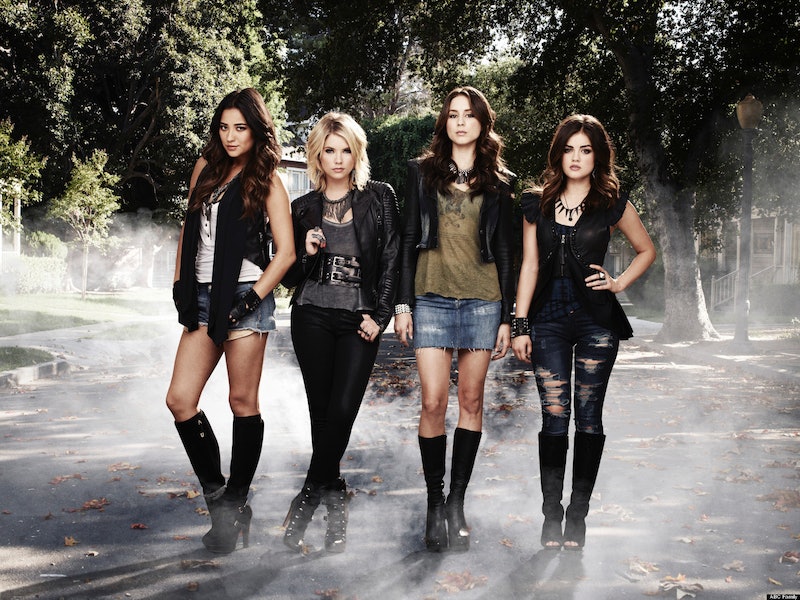 For a season that was coined "the season of answers" by the Pretty Little Liars writers, we sure do have a lot of questions. Season 4 of Pretty Little Liars may have answered a lot of our questions about the night that Ali disappeared, but it wouldn't be PLL if every answer didn't come with three times as many questions. Luckily, showrunner I. Marlene King has dubbed Season 5 "the season of answers 2," which means we may finally stop scratching our heads about exactly what went down on the past four seasons of this show.

While I still haven't recovered from all the questions swirling around in my head in the wake of Season 4, I'm pretty grateful that more answers are coming our way. We're still totally clueless as to the identity of A, and while that may be the ultimate question, I still want to know the answers to these smaller, significant parts of the overall mystery. Here are the 63 questions I have for Pretty Little Liars Season 5:

Who is buried in Ali's grave?

Who killed the person buried in Ali's grave?

Who hit Ali with the rock?

Why did Mrs. DiLaurentis bury her daughter without checking for a pulse?

Why is Jason acting so sketchy? Did he hit Ali with the rock?

Will Ezra survive the gunshot wound?

Will Aria and Ezra get back together if Ezra lives?

Will we ever see Maggie or Malcolm again? (Dear God please no...)

What does Melissa know about "that night?"

Did Melissa kill that girl?

Is Wren MIA because he's really A, or is he just filming Once Upon A Time?

Why does the show want us to care about who killed Toby's mom?

Does Ali have a twin? But actually.

Is Cece Ali's friend or foe?

Who killed Ian if it wasn't Ali?

What major secret did the N.A.T. Club have on Ali's family?

Are Hanna and Detective Holbrook going to hook up? No please!

What were on those tapes?

Is Jenna blind or not? No longer remember.

Have we seen the last of Jake?

Now that he's not dating Mona, will Mike go back to non-existence?

Will Caleb and Hanna get back together now that Ravenswood isn't a thing?

Why is Travis so beautiful and perfect?

Why do Spencer's parents think she's the craziest?

How much Adderall do you need to take to get Spencer's crazy-eyes?

Is Ashley Marin going to be accused of murder again? Mrs. D IS dead...

Why is Lucas coming back to Rosewood?

Did Mona try to kill Ali?

Is Red Coat only Ali and Cece, or is there a third Red Coat still out there?

Who pulled the other girls out of the fire if Ali only pulled out Hanna?

Who framed Toby for starting the cabin fire?

Was Ali the one on the private plane?

Who was in the baby doll mask in the first Halloween episode?

Who was the ghost girl that Ashley Marin saw on Halloween?

Are their more secret love children running around Rosewood?

Who tried to kill Jason in that elevator?

Who gave Jason the money for tips about Ali's killer?

Does Jason know that Ali is alive?

Why did Jason lie about going to rehab?

Why was Shana a thing?

Are Paige and Emily broken up? Unclear.

Will Emily be able to go to college? It seems like no one is thinking about college.

What are Spencer's safety schools?

What secret does Noel Kahn have?

Does Ali have romantic feelings for Emily?

Have we seen the last of Maya's killer?

Why is it never winter in Rosewood? It snows in Pennsylvania!

Who was that creepy boy and his grandma from the doll shop? Spooky.

Are we supposed to completely forget about Ravenswood now?

Why did Mona have an A lair in the Lost Woods Resort before Ali died?

Was Mona Ali's A before she was the little liars' A? She's not A now, right?

Why can't we go talk to Mrs. Grunwald to fill us in on all the details? She's psychic!

Will we ever find out who A is? I NEED ANSWERS SHOW!