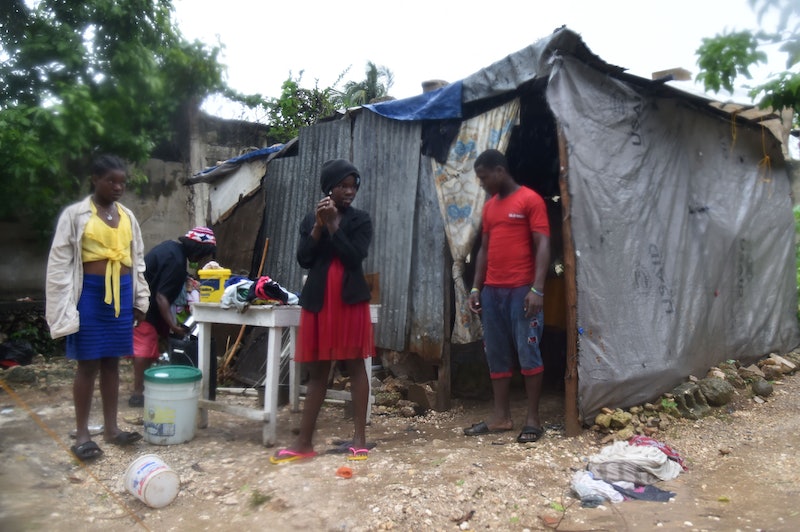 On Tuesday morning, the combination of powerful sustained 145 mph winds and heavy rains from Hurricane Matthew hit several towns in Haiti, causing widespread devastation. Seven people have already died from the tropical storm, and a report from CNN news revealed that interim Haitian President Jocelerme Privert fears for the safety of those living in the surrounding areas:

We've already seen deaths. People who were out at sea. There are people who are missing. They are people who didn't respect the alerts. They've lost their lives.

Due to the strong winds Tuesday morning, even people in Port-au-Prince, Haiti's capital city which is home to over two million, have been stocking up on emergency supplies in case of flooding and sustained damage. Aid worker John Hasse echoed the sentiments of President Privert when he expressed the widespread concern about further destruction in Haiti in an interview with U.S. News:

We're expecting a lot of houses to go down because of the poor housing infrastructure in a lot of the rural areas where we work. With wind this strong, it will be extremely damaging and dangerous and homes for the average person are made of mud and sticks or poorly constructed cinderblock.

As the tropical storm heads through Cuba before making its way toward the U.S., it's important we stay connected and aware of what's going on with our neighbors in Haiti. For those who haven't been closely following, here are some pictures of the current situation.

The Category 4 Hurricane Matthew made landfall in Haiti at roughly 7 a.m. local time Tuesday morning, and as you can see from the photos, the fallen trees and debris increased flooding and road blockage.

The combination of heavy rains and fallen infrastructure rendered many roads uninhabitable. The strong winds also wiped out many fields and crops in Haiti.

While flooded streets and broken infrastructure can be fatal and terrifying for all involved, the hurricane's effect on people's homes causes greater displacement, both physically and emotionally.

Many people took videos and photos of their neighborhoods being destroyed by the storm, which likely only added to the overall stress.

It's terrifyingly easily to process natural disasters in abstract ways when we don't think about the individual people who are being affected, and it's crucial we don't remain ignorant about what's going on.

People have been banding together to mend homes, while others in Port-au-Prince prepare for the possibility of more damage.

Many parents have the added stress of protecting their loved ones.

Hopefully, Hurricane Matthew won't wreak any more havoc on Haiti as it continues its trail up the coast. You can donate to relief funds through Haiti Relief Funds online here.