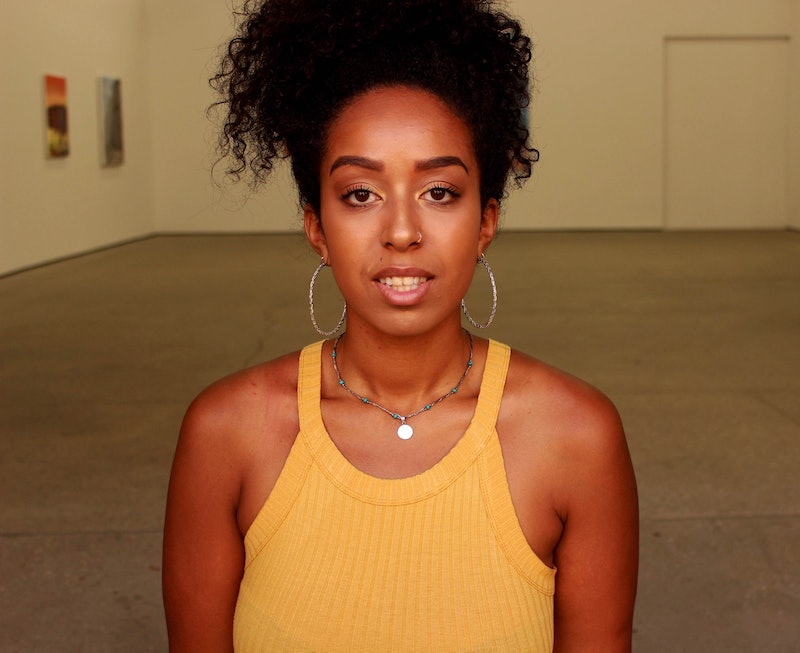 Colorism is definitely a feminist issue — and it's definitely a complex one, at that. The ways colorism affects women are numerous and varied, depending on what cultures or areas of the world you're in; for me, for example, being raised exclusively by white people and growing up with exclusively white friends, I truly never believed that my beige skin could be seen as anything other than negative. As I began to move into spaces with more black people who gently nudged me into the self-love zone, I also learned how my skin color actually granted me certain privileges, which is still something I'm learning about.

As Bustle's Kristin Collins Jackson put it, colorism is "the principle that those with lighter, fairer skin are treated with a higher regard than those with darker skin"; it can happen both within racial communities and between them. At its root, it's bred from colonialism, with the default being "white," thereby holding everyone within a society up against white ideals. From there, it can trickle into communities of color, breeding insecurity and self-hatred; indeed, as Michael 'MJ' Jones wrote on Everyday Feminism in 2015, colorism might also be defined as "internalized racism and white supremacy within the Black community and other communities of color."

There has been some investigation into how doctors often minimize or ignore women's pain and even more research into the unconscious racism that still plagues hospitals in the Western world. And although there hasn't been much written specifically about how the intersection of these failings affects dark-skinned black women, what we do know suggests that it's a problem. In 2002, for example, the Institute of Medicine released a landmark report suggesting minority patients were less likely to receive access to good healthcare than white patients; then, in 2012, a report published in the American Journal of Public Health found that some doctors provided black patients with less quality care and emotional support than other ethnic groups. It's likely that with biases showing both in how women patients are treated and how minority patients are treated, women minorities are doubly impacted.

Almost 60 years after the historic Brown vs. Board of Education case which declared that schools segregated by race are unconstitutional in the United States, evidence from this year suggests black students are still more likely to be suspended than their white counterparts. And a 2014 report from the NAACP Legal Defense and Educational Fund and the National Women's Law Center found that black girls are the most likely group to be suspended from school, despite there being little evidence to suggest that they are worse behaved than other students. Factoring in the implicit bias some educators may have towards dark-skinned students and the double burden of sexism and racism in schools, dark-skinned girls have it harder than any other group when it comes simply to accessing education.

It's not often said in the UK, where I live, but a phrase that attempts to jokingly illustrate colorism refers to "acting light-skinned." It wasn't until I dated another black guy in the United States recently, though, that I began to really unpack what that means. I was told that because I'm multi-racial, some men in the black community would assume I was more narcissistic than darker women. I learned that to "act light-skinned" is to be a woman with too high an opinion of herself. (Interestingly, when this term applies to guys it usually means acting over-emotional instead.) Heck, I even found the phrase funny until the guy I was dating suggested I was high maintenance because of the color of my skin. (No, boo, I have high standards. What's more, they would still be high if I were lighter or darker than I am.) My point is this: Although "acting light-skinned" is usually said in jest, and although I understand that in the black community, my skin affords me certain privileges, these terms only serves to divide us all and pit black women against each other.

I recently watched Oprah Winfrey's 2015 documentary Light Girls. In it, several men talked about their preference for darker women because of a perceived greater loyalty. Others compared lighter women to "trophies." And the supposed difference in "attitude" because of the shade of our skin? That makes no sense to me at all. When it comes to dating in the black community, colorist stereotypes are harmful for everyone, no matter how light or dark their skin might be.