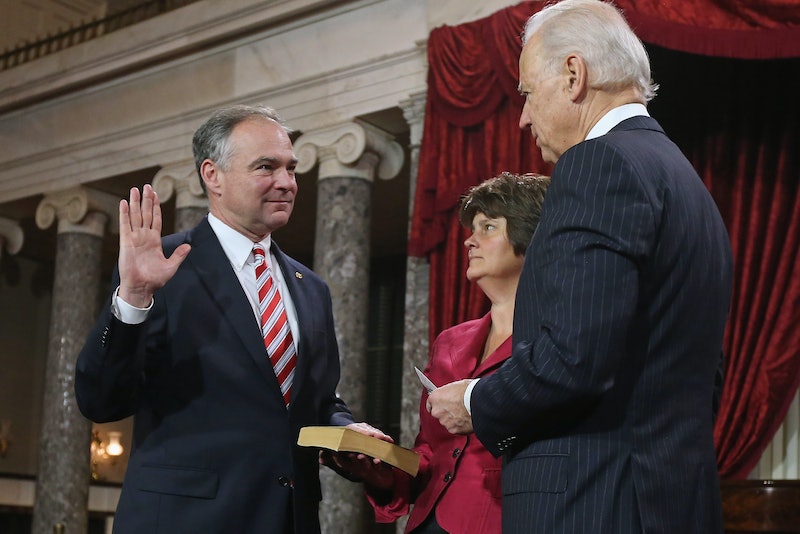 Democratic vice presidential hopeful Tim Kaine has a chance to make himself better-known at Tuesday's vice presidential debate with Republican VP candidate Mike Pence. Kaine would have some big shoes to fill as Joe Biden steps down from the position. Though the latter was much more of a national name than Kaine when he ran for vice president, there are several similarities between Kaine and Biden, mostly thanks to the background they share.

Biden and Kaine both have deeply religious roots, having attended Catholic school and been raised with religious values. Their experiences informed their politics in similar ways; both men hold, or have held, socially conservative values which at times put them in tension with their party.

Yet both have tended not to let those personal values steer their political decision-making, at least recently. In 2005, Kaine, then running for governor of Virginia, said in a radio ad: "I oppose gay marriage, I support restrictions on abortion — no public funding and parental consent — and I’ve worked to pass a state law banning partial-birth abortion." Yet he's garnered a 100 percent rating from NARAL since entering the Senate in 2012, Vox reported, since he now holds that, regardless of his personal views, "matters about reproduction and intimacy and relationships and contraception are in the personal realm." He also now supports marriage equality, according to The Wall Street Journal, a change of heart which he credits to the gay and lesbian couples in his life.

Biden has been vocal about his personal opposition to abortion, but like Kaine, he thinks the government doesn't have the right to make the practice inaccessible. In a 2012 debate, he said, "With regard to abortion, I accept my church's position on abortion ... But I refuse to impose it on equally devout Christians and Muslims and Jews, and — I just refuse to impose that on others." And he attributes his support of same-sex marriage, which he expressed in 2012, to the show Will & Grace.

Though Kaine and Biden tend to make political decisions that are socially liberal, the fact that they hold personal beliefs to the contrary informed by their religious upbringings could give them both some cross-aisle appeal to conservative voters who identify with their backgrounds.

As for other tenets of their beliefs, both are motivated by a strong sense of justice. As Politico reported, Biden came up as a public defender, and Kaine as a lawyer representing people who had been subjected to housing discrimination. Biden comes off as genuine and sincere, as a person who works for what he believes is best for others. Kaine has a similar folksy quality, and we'll see if he can match the current VP on the perceived authenticity scale.

Kaine and Biden have similar roots that provide for some easy comparisons between the two. How Kaine compares to Biden more generally will only be seen if he ends up being the next vice president.