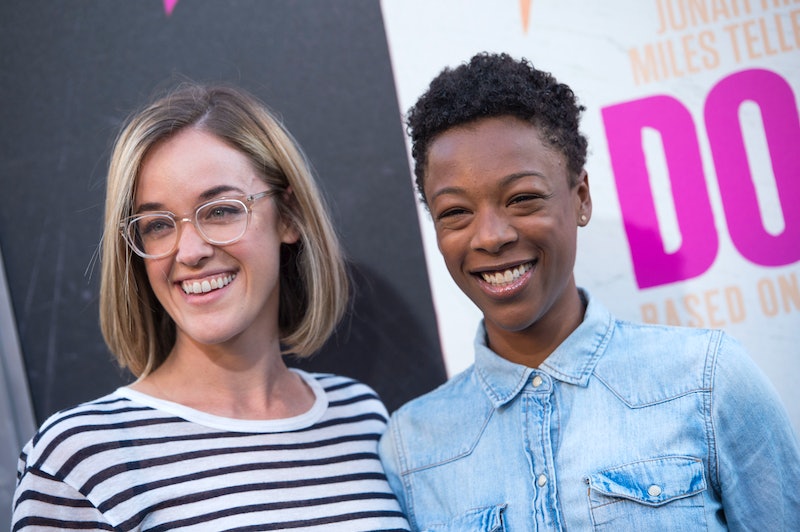 After a successful past season of Orange Is the New Black, there's more good news — star Samira Wiley and OITNB writer-produce Lauren Morelli are engaged. Wiley shared the exciting news via Instagram with a photo of the couple smiling as she holds up her hand to show a beautiful diamond ring. It's simply captioned "Yes." The couple has been together since 2014, the same year that Morelli came out as gay in an essay that was published on Mic.com.

Morelli, who was married to a man at the time she joined Orange is the New Black as a staff writer, credits the show's creative process with helping her realize that she's gay — and that she was in love with Wiley. In her Mic.com essay she wrote:

“I was nervous about the first love scene I’d written for Alex and Piper. I’d loved writing it, loved watching a tenderness emerge in their relationship where passion always seemed to be the ruling principle, but by that time, I was so deep in my own self-doubt that I constantly felt like a fraud... I was sure it was bleeding into my writing. How could it not? I was married to a man, but I wasn’t straight."

Morelli and her ex-husband, fellow TV writer Steve Basilone, divorced in 2014, but Entertainment Weekly reports that the two have remained close friends and she recently appeared as a guest on Basilone's podcast, Terribly Funny.

Congratulations to Wiley and Morelli as they begin an exciting new chapter in their lives together.