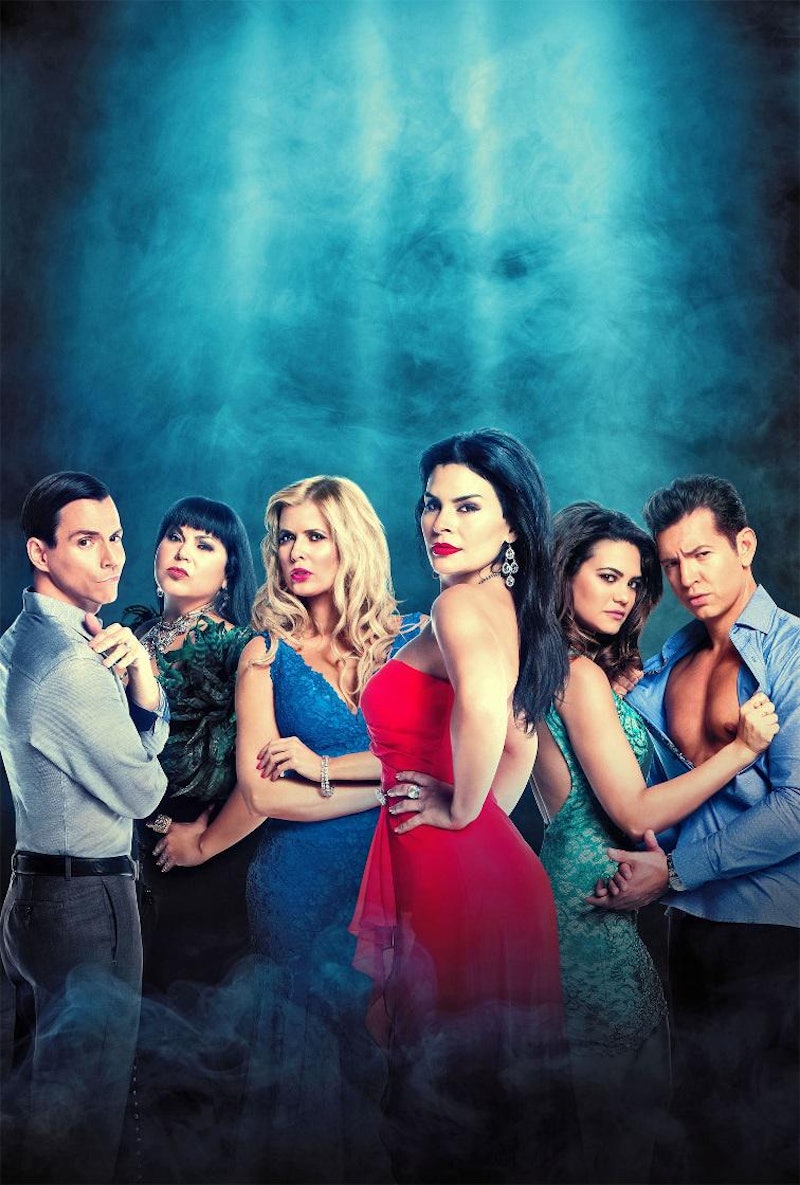 Telenovelas have a reputation for serving up over-the-top fighting, romance, and heartache — oftentimes even more so than English-language soap operas, if you can believe it. But did you know that the actors behind some of todays' biggest telenovelas are just as outrageous in real life as they are onscreen? Well, that at least seems to be the case for the cast of My Life as a Telenovela .

Set in Miami, WE tv's newest docuseries, which premieres on Friday, Oct. 7 at 10 p.m. ET, follows a group of telenovela stars trying to navigate their way through all of the hard work, competition, and drama of the biz. This season promises to bring "a new rival" with "a really dark past," "a box full of secrets" (seriously), and plenty of knock-down, drag-out fights, and that's all just according to the series' 90-second trailer.

So have I piqued your interest enough yet to want to find out more about the men and women participating in this real-life soap opera? Good, because we all know a soap opera is only as good as its characters, and this one is full of 'em, in every sense of the word. Get to know the cast of My Life Is a Telenovela below, and prepare yourself for things to get as dramatic as a soap opera when the new series premieres.

So it looks like that "new rival" I previously mentioned is going to be Maria "Raquenel" Portillo. She originally got into show biz as a singer after being discovered by big-time Mexican music producer Sergio Andrade at the age of 15, according to her cast bio. Raquenel would go on to sing with Mexican pop star Gloria Trevi and form the girl group Boquitas Pintadas.

It was while she sang with Trevi that things took a dark turn for Raquenel. Raquenel, Trevi, and Andrade were arrested in 2000 "after being accused of luring young girls into a cult-like pornographic ring," according to Billboard. They all maintained their innocence during the court proceedings, according to USA Today. Trevi and Raquenel ended up spending four years and eight months in jail before being acquitted of all charges in 2004 because of "insufficient evidence," the Associated Press reported at the time. Andrade was found guilty and sentenced to seven years and 10 months in prison (he had already been in prison for five years up to that point), but he was released on time served and for paying reparations to an accuser, according to the BBC.

After that, Raquenel started her acting career and starred in many telenovelas in Mexico and throughout the rest of the Latin world, including Santa Diablo, her show bio says.

Sissi stands out among the My Life Is a Telenovela crowd as the only blond among the bunch, but there's much more to her than just her looks, even if they have played a big part in her career as a model who has been on the cover of Playboy in Latin America, according to her cast bio. Most notably, Sissi appeared on the variety show Sabado Gigante. She has also appeared in the telenovela Los Secretos de Lucia and films, such as Rumble.

Every reality show has a meddler, you know, the person that initiates the drama but somehow avoids getting into the thick of it. From the series' trailer, it looks like Enrique Sapene will fulfill that role.

Maybe that's because Enrique is not only an actor but also a producer, according to his Twitter bio. His cast bio also says he comes "from a very wealthy and well-known media family in Venezuela" and that he has worked as a reporter.

But as far as his acting goes, Enrique has worked in both the telenovela and American markets, appearing in such series as Borderline, Hacienda Heights (what a perfect name for a primetime soap), Escandolos (this is the best TV show name I've ever heard), and Tómame o Déjame.

And just like Sissi, Enrique is no stranger to the reality TV game. He appeared as a contestant on the VH1 competition series ¡Viva Hollywood! , which pitted 12 Latino and Latina actors against one another to find the next great telenovela star. Enrique unfortunately didn't win the contest, but perhaps he got a better prize in eventually earning a spot in the cast of My Life Is a Telenovela.

Similar to Enrique, Liliana Rodriguez Morillo also comes from a legendary lineage. She is the daughter of Joe Luis Rodriguez, aka El Puma, and Lila Morillo, both famous singers and actors in Latin America, according to her cast bio. Liliana's sister and best friend, Lilibeth Morillo, is also a famous singer and actress.

But Liliana is also making a name for herself in the entertainment industry in her own right. She sings, acts, and hosts and has appeared in telenovelas like Gata Salvaje. Her cast bio also says she's "known for being loud, outspoken, and has even been fired once from a show for saying the wrong thing," which means she'll be absolutely entertaining to watch on My Life Is a Telenovela.

Gustavo Pedraza has had an especially successful career in telenovelas, appearing in such series as El Talisman, Marido en Alquiler, En Otra Piel, Bajo el Mismo Celo, and Eva la Tailera. I kind of feel like Gustavo will be better at bringing the drama when he's acting in a telenovela rather than being himself on My Life Is a Telenovela, but I'm still willing to give him a chance.

Last but certainly not least, we have Alina Robert, who has appeared in many of the projects you've already heard here today, including Sabado Gigante, El Talisman, and Los Secretos de Lucia, according to her cast bio. She has also appeared in the TV series Corazón Apasionado, Crónicas de Pecados Capitales, and Quien es Quien. Alina has also had roles in films like El Justiciero 2, CineLatino, and With Elizabeth in Mount Dora.

Looking ahead to My Life Is a Telenovela, it also looks like Alina will be getting into a pretty epic fight with Sissi this season, which appears at the end of the show's trailer. Remember her name.

And I'm sure this will be just one of many conflicts this fascinating cast of characters will get into this season.