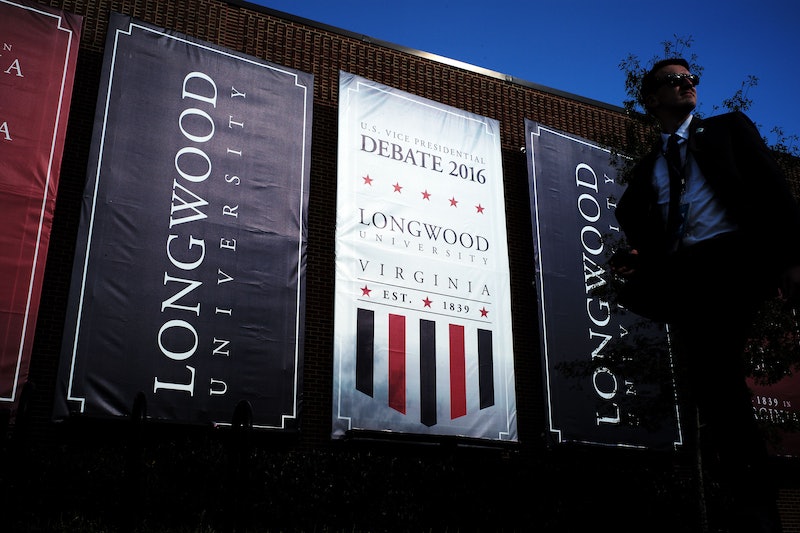 We finally have a much-needed break from Donald Trump, but only for a night. The vice presidential debate airs on Tuesday, Oct. 4, giving both campaigns the chance to showcase their respective side kicks: Sen. Tim "America's Nice Dad" Kaine and Indiana Gov. Mike "I've Made A Terrible Mistake" Pence. This is the only time these two vice presidential candidates will face off on a national stage, and they don't have much time to do so.

This election cycle, however, has brought the drama in the form of a blustery billionaire business man with a reality TV pedigree. Trump is coming off a pretty tumultuous week, ranging from an unhinged 3 a.m. Twitter storm attacking both Hillary Clinton and former Miss Universe Alicia Machado to a New York Times report alleging the candidate hadn't paid federal taxes for nearly two decades. It did some damage: Trump has slipped in many major polls.

Meanwhile, Clinton has seen her campaign rising. A new CNN poll conducted between Sep. 28 and Oct. 2 showed Clinton polling at 47 percent in a four-way race; Trump polled five percentage points behind her. That same poll found that in a two-way race, Clinton would receive 51 percent of the vote, with Trump coming in at 45 percent.

Trump's slide in the polls, coupled with his multiple personal and PR disasters, places more than a little pressure on Pence. The Indiana governor needs to steer this campaign out of turbulent waters before it capsizes just five weeks before Election Day.

Kaine, arguably, has the upper hand. He is following a Clinton debate performance at Hofstra University in which she was largely considered the winner. His job is to make sure he isn't steamrolled by Pence more so than necessarily going heavy on the offense.

The 2016 vice presidential debate will be held at Longwood University in Farmville, Virginia. Elaine Quijano of CBS News will moderate.