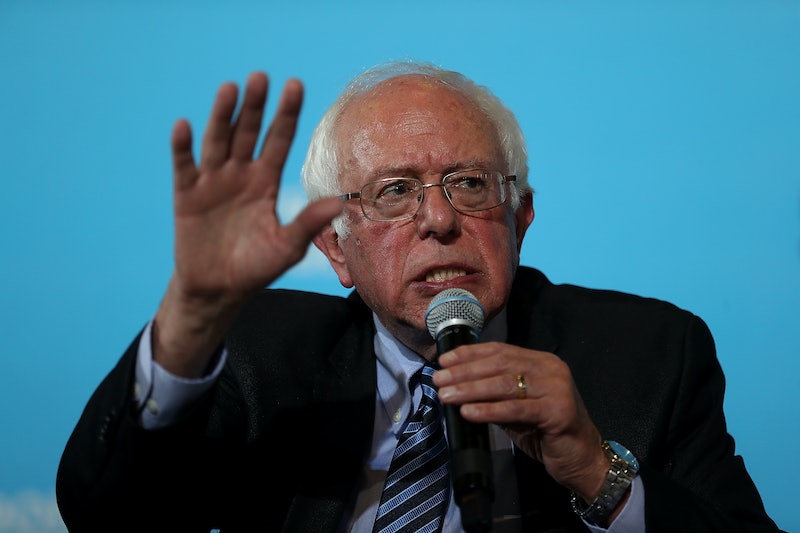 Well, that was a change of pace, huh? After an altogether wild and unpredictable first presidential debate between Hillary Clinton and Donald Trump, the bottom-halves of their respective tickets — Tim Kaine and Mike Pence — faced off in Farmville, Virigina. Surprisingly, their debate over a number of issues was more vigorous than that of Trump and Clinton just days prior. So, what did Clinton's backers think? Well, if you're wondering what Bernie Sanders' response to the vice presidential debate was, you're going to be a little disappointed.

Sanders wasn't in attendance at the debate, thanks to a currently packed schedule in service of Clinton's candidacy. When the debate began, according to the campaign's official schedule, he was at a rally in Duluth, Minnesota. And that might help explain why the 74-year-old Vermont senator kept quiet about Tuesday night's showdown. In fact, Sanders didn't send a single tweet throughout the duration of the debate ― at the time of this writing, his most recent one was sent at 8:31 p.m. ET, about a half-hour before the big event began. It was definitely on-point with Kaine's line of attack, however, hitting Trump over claims that he didn't pay federal income taxes.

Here's one thing you definitely can't deny right now, however: whether or not Sanders is chiming in to give Kaine some post-debate ups, he's most definitely putting in the work for Clinton's cause right now. A brief glance at his extended schedule on the Clinton campaign website tells the tale ― he's got three events (one in Iowa, two in Wisconsin) on Wednesday, October 5th, and another seven events in battleground states over the following two days.

Suffice to say, it's clear that the Clinton team views Sanders as one of their foremost, gold-plated, essential surrogates for the remainder of the campaign. And that'll be true regardless of whether he tweets any well-wishes to Kaine or Clinton in the aftermath of the debates ― really, what's happening right now is Sanders making good on an oft-repeated promise from his primary campaign, that he planned to do everything in his power to defeat Donald Trump. It may have taken awhile, through those long, contentious summer months, but hey! Better late than never, right?