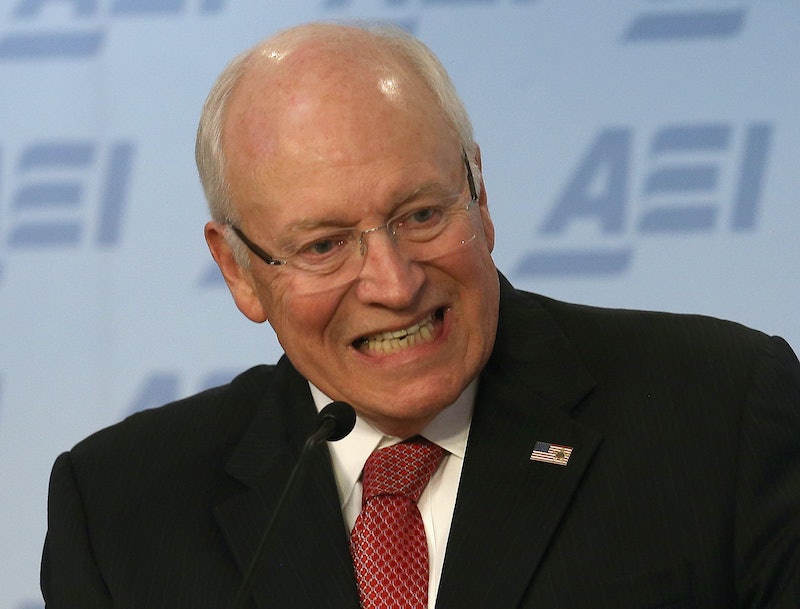 Some vice presidents go down in infamy or adoration. Some are quickly forgotten. But whatever their legacy, being a literal heartbeat away from the presidency is an important job, and a club that holds very few living members. With only three living former Republican vice presidents, Indiana Governor Mike Pence has a small sample size to draw from for camaraderie and inspiration. For reasons that will become apparent in a moment, George W. Bush's VP Dick Cheney is the most likely to be friends with Pence. But are Pence and Cheney friends?

You remember Cheney, right? He's the VP who became legendary for, among other things, accidentally shooting a guy in the face while quail hunting. But in spite of Cheney's lack of hunting prowess, Pence revealed in a September interview with ABC's The Week that he would model his own vice presidency on Cheney's.

In the interview, Pence said, "I hold Dick Cheney in very high regard in his role as vice president." Pence further said that he wants to be an "active" vice president. He went on to deflect the interviewer's comment that Cheney was often criticized in part for that reason, saying instead that he admires a vice president who acts as a "champion" of the president.

It's an interesting choice in a role model. Cheney was notoriously unpopular by the time he left the White House. His oversight of Americans (in that he was behind the Terrorist Surveillance Program) and support of torture were particularly controversial, as was the war in Iraq. In the end, the exited his term as Vice President with a mere 13-percent approval rating.

But aside from Pence viewing Cheney as a role model, it doesn't seem as though he has ever met Cheney, let alone befriended him. Cheney did openly throw his support behind Republican presidential nominee Donald Trump back in May, but he hasn't necessarily been an enthusiastic supporter of the Trump campaign — or at least, he hasn't been particularly vocal about his support.

So officially, no, Pence and Cheney are not friends. But it's safe to say Pence is a fan. Let's just hope if they ever do meet, they don't go hunting together.