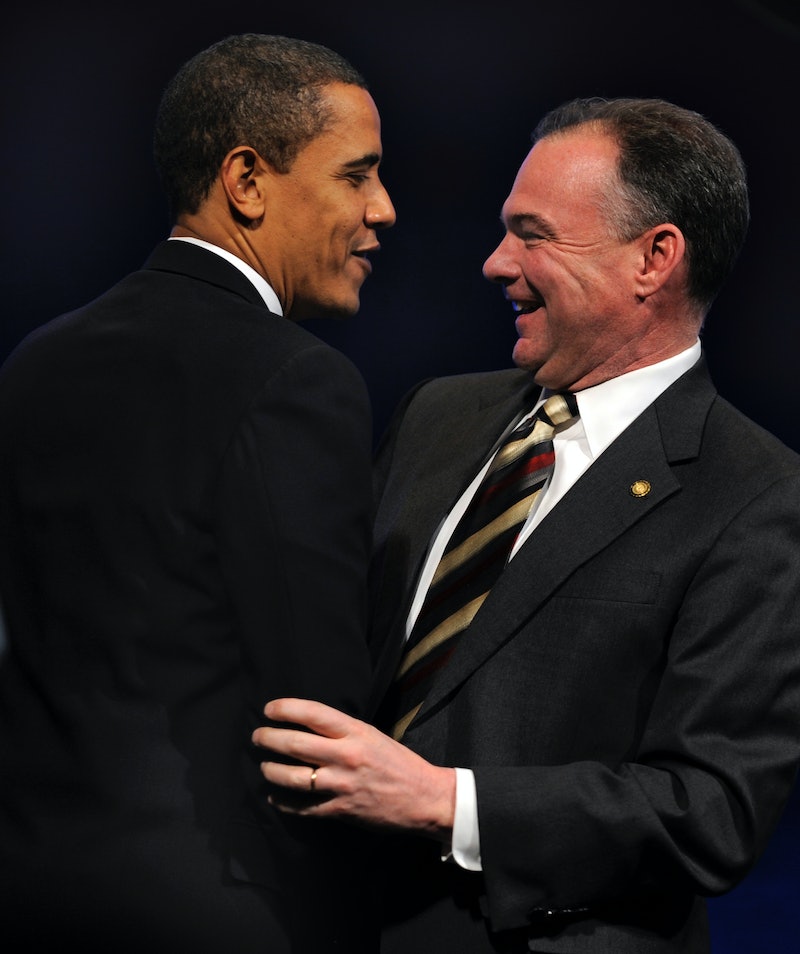 Sen. Tim Kaine wasted no time in throwing his support behind Hillary Clinton's 2016 presidential bid, endorsing the former senator and Secretary of State more than a year before she officially announced her candidacy. But while Clinton's running mate is "with her" now, he hasn't always been a supporter. In 2008, Kaine endorsed Barack Obama, not Clinton, for president.

Kaine was an early supporter of Obama's 2008 presidential bid, calling it "a very simple decision." When he publicly endorsed Obama for president in February 2007, Kaine said, "I am very happy to say it is a very simple decision for me in terms of what I think is important in my assessment of where the nation is to endorse Sen. Barack Obama as our nation's next president."

While Kaine's endorsement of Obama came quite early in the 2008 election, it was not altogether surprising given how much the two politicians had in common and the relationship they'd established years prior. Obama had stumped for Kaine in 2005 and the then-Virginia governor was known to have nothing but good things to say about the senator. "Sen. Obama is just in a completely different category than anybody I've ever stood on a stage with," The Washington Post reported Kaine said in an interview conducted in January 2007. "There is just a feeling of, you know, kind of a projection of hope on him from an audience that is just unreal. It's unreal."

In fact, Kaine — then the governor of Virginia — was even considered to be someone who "ranks very, very high on the short list" of Obama's VP candidates, according to a POLITICO report. At the time, it was believed Kaine was being considered because his background as a civil rights lawyer, his fluency in Spanish, and his history as a Catholic missionary could help Obama gain the support of Catholic, Hispanic, and Virginian voters (the latter being especially critical considering Virginia is a battleground state).

But while Kaine was an enthusiastic and vocal Obama supporter in the 2008 and 2012 elections, he was quick to publicly praise Clinton as "the right person for the job" when speculation about the 2016 election first began. Kaine may not have been with Clinton in 2008, but he's clearly with her now. The Democratic candidate for vice president will debate Donald Trump's running mate, Gov. Mike Pence, Tuesday, Oct. 4, at Longwood University in Farmville, Virginia, in the one and only vice presidential debate.