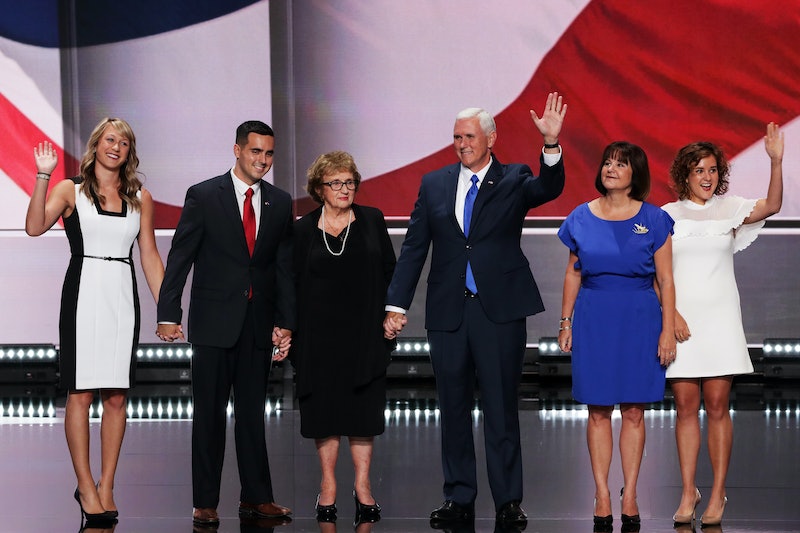 In the first and last vice presidential debate on Tuesday, Oct. 4, both Indiana governor Mike Pence and Virginia senator Tim Kaine will argue on behalf of their presidential running partners. Debates are times where politicians can appeal to the American people, and with so many eyes on them, it's never a bad time to talk about family and what theirs means to them. For Pence, this would include his son, Michael, who is a Marine. He's talked about him before, but you may be wondering where is Pence's son, Michael, stationed?

The younger Pence arrived in Pensacola, Florida, for flight training in July, according to the Pensacola News Journal. The paper confirmed that in July, Michael became a student military aviator for Training Air Wing Five where he was learning to fly the T-6 B Texan II training aircraft. The flight school at the Naval Air Station is a part of Michael's training as a Marine Corps pilot. The marine attended Purdue University to be a pilot, then became a Marine Corps officer and was commissioned as a second lieutenant.

Shortly after his father was elected to governor of Indiana, Michael told WTHR, "Frankly, we've had a pretty normal childhood." Before Pence became governor, he served for 12 years in congress. Pence's children have joined him on the road both in his political career in Indiana and now during his campaign with Donald Trump, so it's safe to say his kids are pretty used to him being in public office, and can offer their support.

Pence isn't the only potential vice president with a son in the military; Kaine's son Nathaniel is an infantry officer and security force adviser at Camp LeJeune in North Carolina, according to Military.com. Last year, Nathaniel was deployed to Africa to support Special Purpose Marine Air-Ground Task Force Crisis Response Africa to help Tanzanian troops with counter-trafficking operations. The two vice presidential candidates also have something in common with current vice president Joe Biden. Biden's two sons, Beau and Hunter served. But despite their sons' time in the service, neither Pence nor Kaine have served in the military.

Considering the tension overseas, the support of the commander-in-chief, as well as their running mate, toward our troops is key. We'll see if Pence brings up his son's service during the debate, in what should be an interesting head-to-head for the two vice presidential nominees.