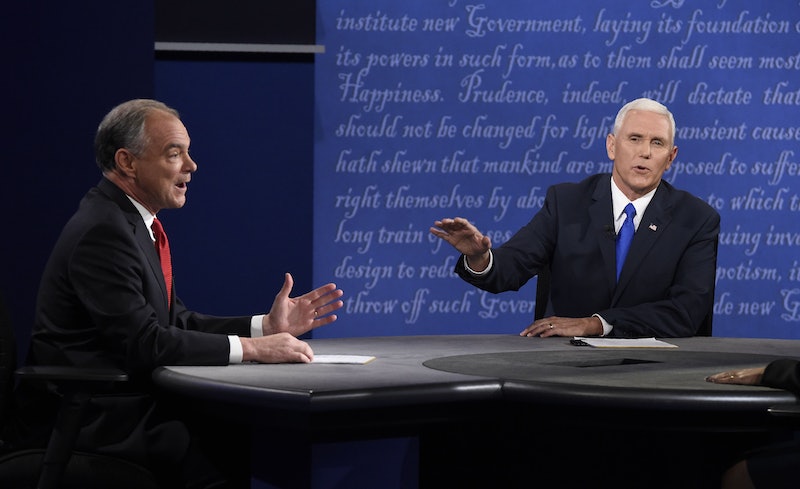 After a ninety-minute head-to-head between the two nominees during which time he had to constantly defend the record of his running mate, Donald Trump, Republican vice presidential nominee Mike Pence lost the one and only VP debate. The single meeting between the two number-two candidates, Pence and Democratic VP nominee Tim Kaine, at Longwood University in Virginia, saw the potential VPs discussing foreign and domestic issues, as well as trying to defend and promote their extremely unpopular running mates. But armed with a seemingly inexhaustible supply of examples of Republican Presidential nominee Donald Trump’s lies, inconsistencies, and hypocrisies, Kaine hammered Pence on Trump’s record.

Although neither of the presidential nominees were present at Tuesday evening’s debate — moderated by Elaine Quijano, daytime anchor of CBSN, the network’s 24-hour streaming news channel — their presence could be felt throughout the debate, with both VP candidates calling into question the qualifications of the other party’s presidential nominee.

Both Pence and Kaine have been campaigning hard the last few weeks, though neither has made any waves big enough to grab headlines from their running mates. While Democratic nominee Hillary Clinton has enjoyed a week of positive reviews of her performance at the first debate, GOP nominee Donald Trump has had one of his roughest weeks of the campaign. Following last week’s first debate, he got caught up in a media mudfight with former Miss Universe winner Alicia Machado, and last weekend, The New York Times published leaked tax records that indicated that Trump declared losses of $1 billion in 1995, which might have allowed him to avoid paying taxes for two decades.

Although Pence made efforts to force Kaine to defend Clinton's record, the mounting number of different charges against Trump required Pence to engage in a constant dodge-and-weave, which looked a lot like a retreat.

Pence clearly had the steeper climb of the two candidates; his running-mate’s shenanigans over the last week had been hurting the campaign in the polls. In the current RealClearPolitics average, Clinton leads by 3.7 points, and leads individually in all seven of the averaged polls, in some by as many six points. And while Pence’s performance was praised by some following the debate, it seemed unlikely that he’d accomplished the daunting task of helping voters warm to Trump.

At times, the debaters engaged in a lot of cross-talk, needing to be reprimanded several times by Quijano. CBS commentator Bob Schieffer commented after the debate that the Commission on Presidential Debates should have provided the moderator with a “whip and a chair.”

While it may be harder to claim that Tim Kaine won the debate — and there’s a case to be made that neither candidate won — the Trump campaign was in more desperate need of a good headline. In the end, Pence was at best able to deliver a “meh”-dline.