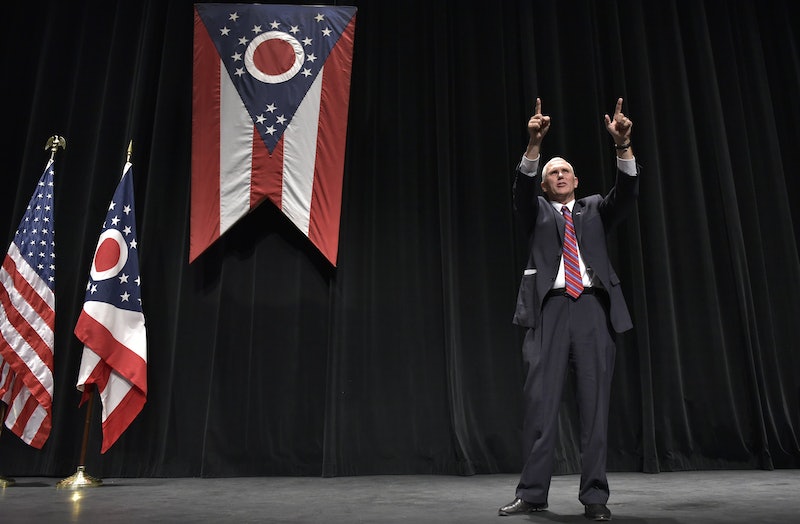 Republican vice presidential candidate Mike Pence's father, the late Edward J. Pence, Jr., inevitably played a large role in shaping the man his son has become. As the country tunes into the 2016 vice presidential debates this evening, here is a closer look at the Republican candidate's father.

According to Columbus, Indiana, newspaper The Republic, Edward grew up in Chicago, Illinois, and was the son of a stockyard worker. In his early years, he was a Second Lieutenant in the U.S. Army and deployed during the Korean War. In 1953, Pence won a Bronze Star for his service. The Indiana governor is clearly very proud of his father's military service, and publicly wished him "Happy Veterans Day" on his Twitter account last year.

Following his deployment to Korea, Edward returned to the United States and married Nancy Cawley Pence, Mike's mother, in 1956. The couple moved from Illinois to Indiana, where Edward worked for Kiel Bros. Oil Company, eventually becoming vice president. In 1959, the couple's first of six children, Mike, was born.

Edward likely played a role in his son's commitment to public service and community engagement. Throughout his lifetime in Indiana, the senior Pence was involved in several state and local organizations, including the Indiana Oil Marketers Association, the Marathon Jobber Council, Columbus Area Chamber of Commerce, and the Knights of Columbus, among others.

Even though he was involved in community volunteering, Edward was initially hesitant about his son Mike's political ambitions. When Mike decided to make his first foray into politics, running for the U.S. House of Representatives in 1988, his father was quite critical, fearing his son did not have a realistic chance of winning. According to Mike's mother, Nancy, in an interview conducted for The Republic, "Ed was really upset about the decision," Nancy said. "At first he was dead set against it, and he really grilled Mike about why he would want to do such a thing."

However, Mike eventually convinced his dad of the seriousness and importance of his ambitions, and Edward Pence came around full force, actively working to support his son in his first political race. According to Pence's brother, Ed Pence, in the same interview, "In the end Dad came around ... In fact, he became a big supporter and was really helpful in coaching Mike on raising money for the campaign. He took Mike throughout the district and introduced him to all the acquaintances he had made in his business career. It was invaluable." Ed also noted that a few weeks before the election, his father had printed a truckload full of campaign signs for Mike, and instructed his sons to put them all over the electoral district.

While Mike lost this first election, and several others after it, he did eventually win a seat in the U.S. House of Representatives in 2000. However, Edward never saw the outcome of that first election in 1988: sadly, he passed away at the age of 58 several weeks before his son's first primary election.

While Mike's father is not here to see his son perform in the Vice Presidential debate tonight and run to be "second-in-command" of the United States government, his prior enthusiastic support for his son's ambitions means he surely would be proud of Mike's rise to prominence on the national stage.