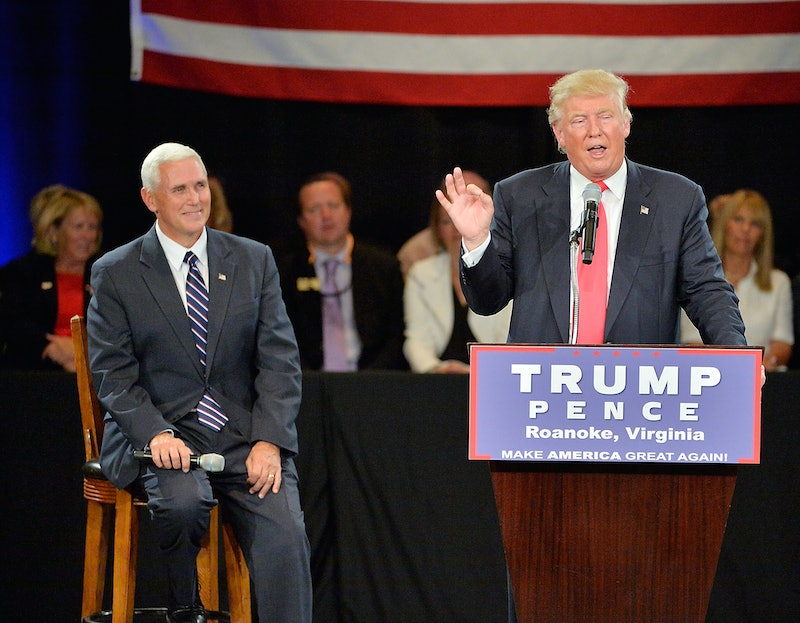 As Mike Pence takes the stage Tuesday night for the vice presidential debate, the Republican nominee will enjoy an extremely rare moment in the sun. Pence has a large amount of political experience as an Indiana governor and representative, but his persona has been dwarfed this campaign cycle by his larger-than-life running mate, Donald Trump. Trump and Pence have apparently had a rocky relationship since Pence was named to the ticket: Trump's formal announcement of his vice presidential pick was widely criticized for its lack of focus on its ostensible subject.

Trump spent most of the VP announcement speech touting his primary victory and businesses, and very little talking up — or even talking about— his running mate. The same is true of Trump's website, which, POLITICO reporter Shane Goldmacher pointed out on Twitter, doesn't even have a bio of Mike Pence.

Vice presidential nominees are usually, and understandably, less widely discussed than their presidential counterparts, but Trump's campaign's apparent indifference to its own candidate is more surprising. Hillary Clinton's website, for reference, features Tim Kaine's bio next to hers. It praises his "optimism" and "relentless passion" and includes a detailed timeline, accompanied with pictures of Kaine throughout his life and career. In person, Clinton has praised his "backbone of steel," and the two appeared visibly energized by each other's company during the ticket's debut last July.

Is there actually bad blood between Donald Trump and Mike Pence, or has Trump just decided his running mate isn't that significant to his campaign? Pence must have heard reports that Trump tried to ditch him after offering him the VP spot, after all. But it's equally possible that Trump's campaign simply doesn't feel that his vice presidential nominee merits equal billing with its star.

Whatever the reason, Mike Pence seems to be something of a rhetorical footnote to Trump's campaign, the establishment Republican adult who passively condones Trump's behavior, and his name recognition has suffered as a result. Donald Trump's son, Eric, couldn't even name the state Pence governs in a recent Fox News interview, and a barber who cut Pence's hair in an ill-advised publicity stunt appeared to have no idea who he was.

Trump's campaign reportedly indicated to another potential VP pick that Trump himself intends to act as the "chairman of the board" of the United States, intending his vice president to act as "CEO," controlling domestic and foreign policy. The tasks Trump allegedly intends to delegate to his vice president are enormously important. As a result, it's certainly in voters' best interest to learn as much as they can about Mike Pence, even if they can't find that information on Trump's own website.