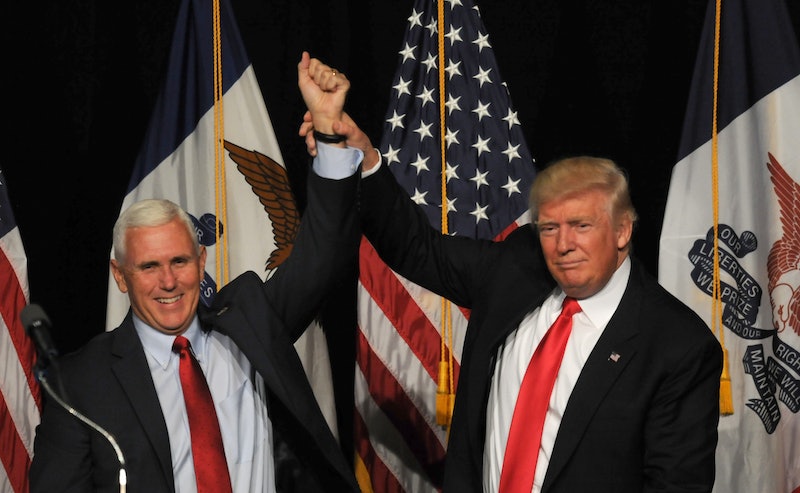 During the first and only vice presidential debate of the 2016 campaign season, Donald Trump's running mate seemed to let something pretty consequential slip: Indiana governor Mike Pence confirmed the leaked Trump tax return is real, commenting that it showed that the real estate magnate suffered "some pretty tough times" in the 1990s. While the Trump campaign hasn't strenuously denied the veracity of the documents, which landed with a thunderclap last week, it's nonetheless notable that Trump's own vice president tacitly confirmed their validity during a nationally televised debate.

Pence's answer on Trump's taxes was in keeping with the line both the candidate and the campaign have been using in recent days ― he argued that Trump wasn't a politician, but a businessman. The suggestion (which has been advanced by Trump surrogates) is that his reporting a nearly $1 billion loss in the 1990s, and thus potentially clearing nearly two decades worth of income tax, spoke to his exceptional skill and intelligence as a businessman.

But regardless, there's a pretty simple upshot here: Pence got up in front of an audience of tens of millions and basically admitted that Trump reported those mind-blowing losses to the IRS.

The Clinton campaign has been making hay off of the tax story for days, taking a two-pronged attack: Both that The New York Times ' story demonstrates the GOP nominee hasn't paid any income taxes in years and years, and that it demonstrates that he's not the solid-gold businessman he's sold himself as.

The documents, reportedly mailed to the Times with a return address from New York City's Trump Tower, have also been confirmed by another very relevant authority on the matter: Jack Mitnick, an attorney and accountant who prepared Trump's taxes for decades, from the 1970s up until 1996. According to the Times report, Mitnick also verified the documents, saying that he had to insert the first two digits of Trump's reported losses manually on a typewriter, because the computer program he used couldn't accommodate them.

In other words, let there be no more questioning whether those tax records were legitimate or not. The accountant in question says so, the campaign has been reacting as though they are, and now, the vice presidential nominee has all but said so during a nationally televised debate. It'll be fascinating to see the next twist or turn in this ongoing tax-related saga.