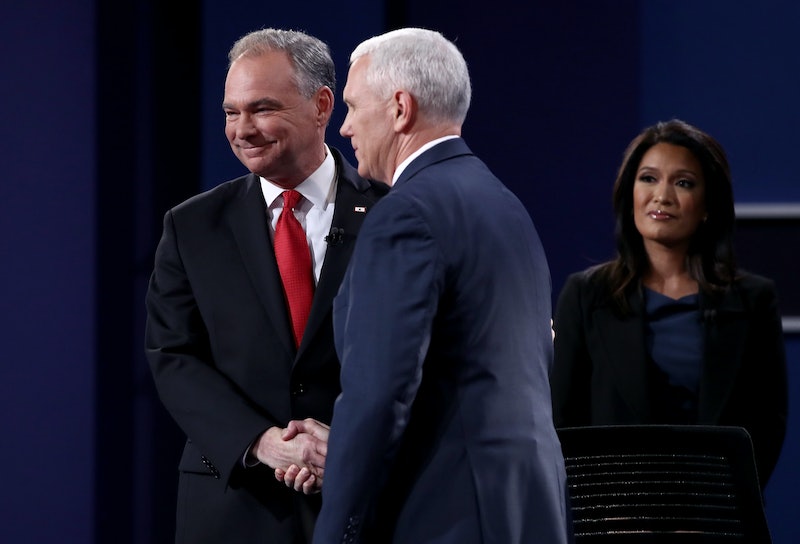 Mere minutes into the one and only vice presidential debate of the 2016 election and CBSN’s Elaine Quijano was already being interrupted by both candidates. Vice presidential candidates Sen. Tim Kaine and Gov. Mike Pence wasted no time Tuesday before they began interrupting each other and ignoring Quijano's requests to keep focused and respect each other's speaking times. Their behavior wasn't lost on viewers, many of whom wondered if the vice presidential debate was just two white men talking over a woman of color.

Perhaps we've no one to blame but ourselves. Was it naive of us to think the vice presidential debate might be the one debate of the 2016 election that wouldn't include a man repeatedly interrupting a woman? Along with regularly speaking over each other, both Kaine and Pence talked right through Quijano's warnings to keep on topic and stick to the time limits provided. More than once during Tuesday's debate, it seemed as if Kaine and Pence had forgotten (or just simply didn't care) that Quijano was also sitting at the table.

Some saw a sexist bent to the banter:

While others noted that the debate recycled a time-old tradition of men talking not just over women, but over women of color.

While many on Twitter were outraged with how often Kaine and Pence spoke over and ignored Quijano, others felt she wasn't doing enough as moderator to keep the two vice presidential candidates under control.

But for every person criticizing Quijano's moderator skills on social media, there was one commending the CBSN journalist for putting up with Kaine and Pence's continued interruptions and cross talk.

Perhaps the biggest lesson learned from the 2016 presidential and vice presidential debates is how difficult it can be to act as moderator. Might I suggest a system where the debate moderator can switch off the microphone of a candidate who is going over their time limit? Then maybe the moderator would get a word in edgewise.

To have a say in this election, you can register to vote above.