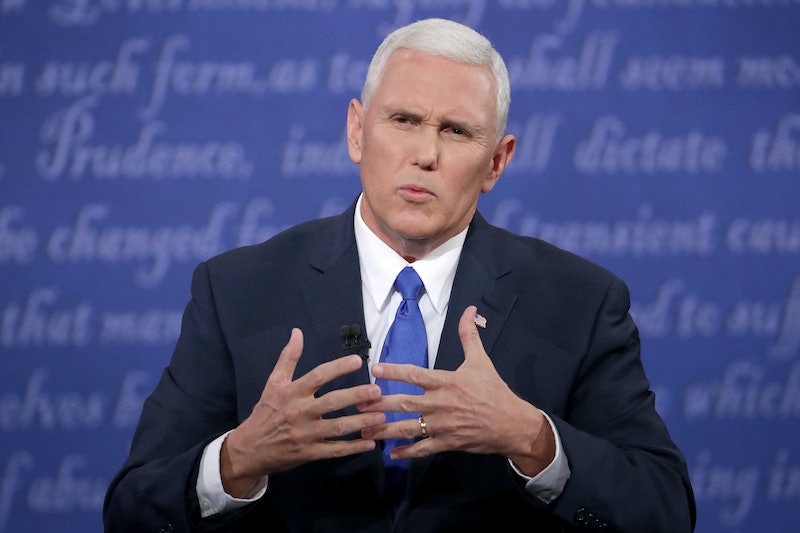 During the Oct. 4 vice presidential debate, moderator Elaine Quijano moved the conversation toward the topic of immigration. She stated that both Hillary Clinton and Trump have made comments that undocumented immigrants who have committed violent crimes should be deported, and asked the vice presidential candidates what they would tell the undocumented immigrants who have not committed violent crimes. In his answer, Indiana Governor Mike Pence repeatedly referred to "criminal aliens," which was a huge mistake.

Donald Trump has laid out a plan to end illegal immigration once and for all in this country. We've been talking it to death for 20 years. Hillary Clinton and Tim Kaine want to continue the policies of open borders, amnesty, catch and release, sanctuary cities, all of these things that are driving wages down in this country, Senator, and also too often with criminal aliens in the country, it's bringing heartbreak. But Donald Trump has a plan, that he laid out in Arizona, that will deal systematically with illegal immigration, beginning with border security internal enforcement. It's probably why for the first time in the history of Immigration and Customs Enforcement their union actually endorsed Donald Trump as the next president of the United States, and it's because they know they need help to enforce the laws of this country. And Donald Trump has laid out a priority to remove criminal aliens, remove people who have overstayed their visas, and once we have accomplish all of that, which will strengthen our economy, strengthen our rule of law in the country and make our country safer once the criminal aliens are out, then we'll deal with those who remain.

Indeed, Trump has said that he would deport "criminal" immigrants. However, Pence, and everyone else, should not be referring to undocumented immigrants who have committed crimes as "criminal aliens." The term is offensive, and pretty much everyone thinks so.

The Library of Congress voted to stop using the term "illegal aliens" earlier this year. The Supreme Court stopped using the term "illegal immigrants" back in 2012. People are not aliens. Calling someone "illegal" makes it sound like the person is unlawful. That is incorrect and horrible. The word alien has a complicated history in the United States, and has taken on a negative connotation, similar to that of a racial slur. Referring to an immigrant an alien is offensive term, and no one, especially a vice presidential candidate, should be using it.