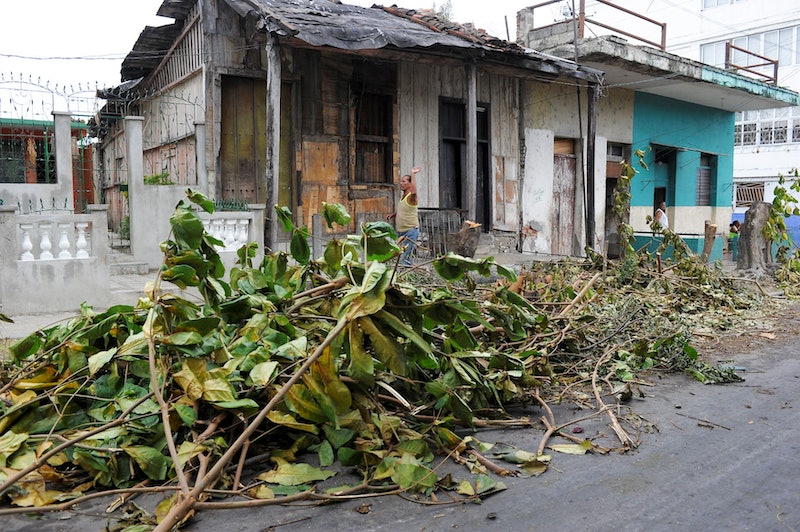 Hurricane Matthew is causing horrible damage as it continues to make its way through the Caribbean. It is being called the most powerful storm to hit the Atlantic in almost a decade, and for those who are interested in tracking the storm, you can find updates to Hurricane Matthew here. The storm is still a Category 4 and is currently hovering over Cuba with sustained winds of 140 miles per hour, as of 8 p.m ET. It had previously been in Haiti, where it caused severe flooding and horrific damage to homes.

In anticipation of Hurricane Matthew, 700 civilians were evacuated from the United States Naval Base at Guantanamo Bay late Tuesday morning, according to NBC. At least three U.S. Navy ships were also deployed to help with relief efforts in the Caribbean.

There's also some eerie timing to Hurricane Matthew. It hit Cuba almost 53 years to the day after Hurricane Flora killed 2,000 Cubans on Oct. 3, 1953. Thus far, eight deaths have been reported, but officials believe that number may rise.

The storm was the first major hurricane of a Category 3 or higher to hit Haiti, in 50 years. Haiti, the poorest country in the Western Hemisphere, had been recovering from the earthquake that ravaged the nation close to seven year ago. The damage caused by Hurricane Matthew may set the country back even further.

Furthermore, officials fear that a spike in cholera, as a result of standing water, could take place as a result of the flooding, a reported by CNN. "That means a potential spike in cholera cases," John Hasse, the Haiti national director of World Vision, a humanitarian aid agency, told CNN. "Other mosquito-borne diseases that have been more or less controlled are going to rear their heads."

And the United States is also bracing for the storm, which is expected to hit the east coast on Thursday. On Tuesday, South Carolina Gov. Niki Haley declared a state of emergency for many of the coastal regions in the state, as well as an evacuation for at least 1.1 million people. The storm is likely to strike the state Friday evening with winds of up to 100 miles per hour.

Florida and Georgia have also issued states of emergency for many low-lying and coastal regions in both states. The storm is expected to hit Florida midday on Thursday.

Forecasters say that the hurricane could leave up to 20 inches of rain in Cuba, in addition to the damage that the strong winds are likely to cause as it makes its way through the country.