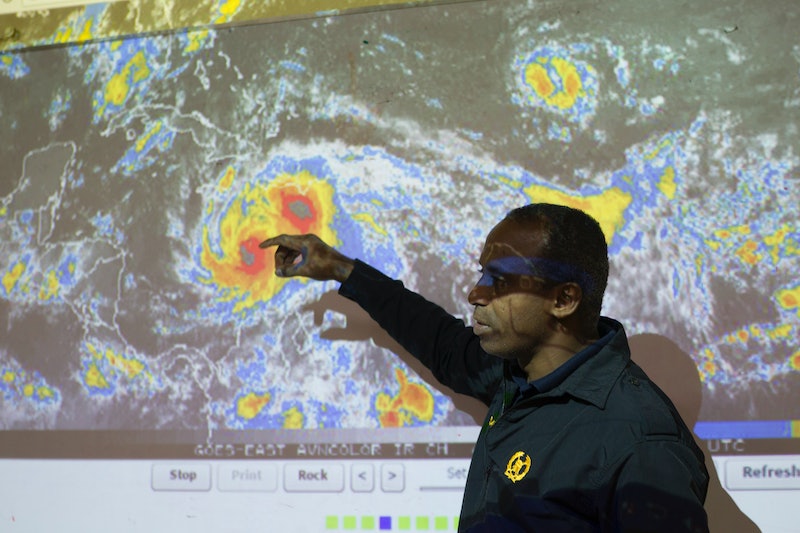 You're likely aware that Hurricane Matthew, the most powerful Atlantic storm in almost a decade, is currently moving through the Caribbean Sea. But what you might not know is why the hurricane is named Matthew. Was the name decided randomly by some higher-up in the government?

The answer to that question is no. There is in fact a system behind the naming of tropical storms. Up until the early 1950s, hurricanes and tropical storms were tracked using a numerical system, rather than names. The problem with this system was that storms could occur simultaneously and cause confusion. For instance, storm advisories for different hurricanes broadcast on the radio could get mixed up. In response to this, an international committee of the World Meteorological Organization established a storm-naming system using "short, distinctive names to avoid confusion and streamline communications," the National Ocean Service reported.

For Atlantic hurricanes, there is a six-year rotation of male and female names which first began in 1979. There are 21 names for each year. In the unlikely event that more than 21 named tropical cyclones in a year, the additional storms will be named after letters in the Greek alphabet.

However, some storms are so famous that their names get retired from the rotation. The retiring of names occurs only "if a storm is so deadly or costly that the future use of its name on a different storm would be inappropriate for obvious reasons of sensitivity," according to the National Hurricane Center. You may recognize retired names like Katrina, Ike, Irene, and Sandy.

It's too soon to tell yet, but the name "Matthew" could be heading for retirement as well. Matthew just beat Hurricane Ivan's 2004 record of being the Category 5 hurricane with the lowest recorded latitude in the Atlantic, according to CSU meteorologist Philip Klotzbach. And according to the Saffir-Simpson Hurricane Wind Scale, Category 5 hurricanes are likely to cause "catastrophic damage." Matthew has already heavily impacted countries in the Caribbean Sea, with hundreds of thousands having to evacuate their homes, according to The Weather Channel.

Matthew is currently on its way toward the Bahamas after hitting Haiti on Tuesday, NBC reported. If you live on the East Coast of the United States (or the East Coast of Canada, for that matter), forecasters say that Matthew could be coming to your area. While the hurricane's future path is uncertain and can change, the East Coast is still fair game for Matthew to hit in the coming week.