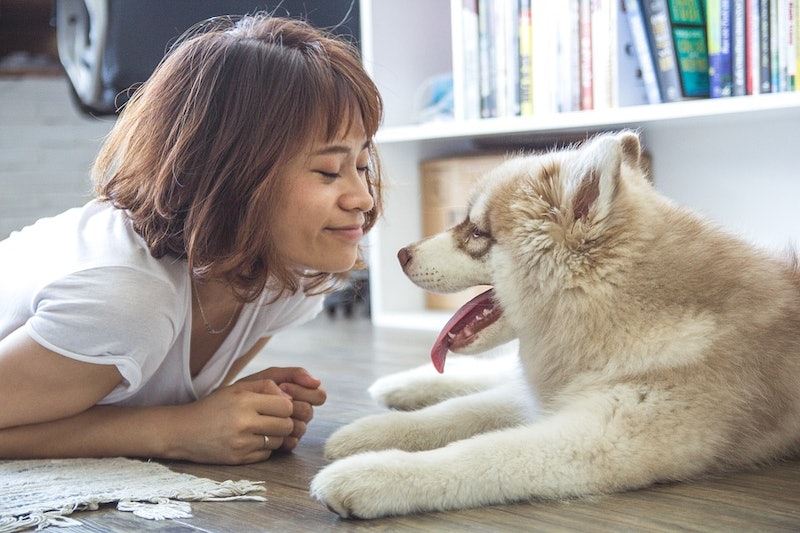 The idea of the friendly, sociable dog is one of the strongest in our narratives of pets. We know the basics: Dogs have been gradually selectively bred from wolves to become human helpmates, rescuing us from wells, providing assistance to the blind or disabled, herding our sheep, and covering us with slobber. But why exactly do dogs like humans in the first place? Are they just innately friendly animals, or is it something special about the nature of dogs and humans that brings us together to produce a million charming Youtube videos? Science has given us at least part of the answer, and it's actually pretty adorable.

The domestication of dogs is fairly ancient; it's likely they were likely first domesticated from breeds of wolf tens of thousands of years ago, though some argument exists as to whether dogs in different regions of the world were domesticated at the same time and from the same origins. There's also a lot of scientific disagreement about how the process really worked; Smithsonian Magazine, in in 2015, reported that there are two competing theories about the origin of modern dogs. One is that humans kept wolf cubs and gradually bred them as pets, and the other is that wolves followed humans around (not unreasonable, as human camps could be a good source of food and warmth) and "domesticated themselves."

We do know, though, that humans have deliberately bred different kinds of dogs for particular traits throughout the centuries to fit specific needs: a snuggly disposition, strength, agility, speed, intelligence, or some other trait that was needed in particular circumstances. (The argument over Montreal's ban on Pitbulls has demonstrated that genes comprise only a small part of the actual behavior of modern dogs; they might have certain innate tendencies, but that's not the whole story.) One of the current controversies over dog breeding in general is the insistence in pedigrees and at high-end dog shows like Crufts on "breed traits" that are actually deeply damaging to the animals. (The sloped back of the 2016 Crufts champion, a German shepherd, has been the ideal for the dog for centuries, but has been condemned as potentially unhealthy and uncomfortable.)

Dogs and humans clearly have an extensive bond; gazing into one another's eyes raises the levels of oxytocin, a pleasure and bonding hormone, in both dogs and owners, something that explains the intensity of our attraction to the breed and theirs to us. But science has provided a few new explanations for why dogs are so prone to come to us at all, rather than sitting in a corner chewing something.

Dogs Have Genes That Get Them To Seek Help

A new piece of research published provides something interesting both for people who love dogs and those of us interested in autism spectrum disorder. It turns out that a particular kind of social behavior in dogs, seeking help from a nearby human to solve a problem, seems to be tied to specific genes — and that those genes, in humans, are linked to social disorders like autism.

It's often a very tricky business determining what exactly pinpoints a certain behavior on a genetic level; for one, genes are rarely the only thing at play in animals or humans. But the scientists behind the dog study, from Linköping University in Sweden, wanted to see if they could "track" a specific gene to a kind of dog behavior. To do it, they took 437 young beagles, none of whom had ever had any training; they'd all been raised in a lab in very similar conditions. They put them in a room with a female stranger and gave them a problem: three boxes with food inside, one of which had the lid locked shut. The dogs were capable of getting at the two first boxes easily, but the last one stymied them; there was no way they could do it on their own.

Some of the dogs decided that the best option was to go get the help of the young stranger standing awkwardly in the corner of the room; you'll be familiar with this behavior if your dog has ever done something particularly stupid or worrisome, and comes to you for comfort, reassurance, or to get the bin-lid off their head. They "seek cooperation by gazing towards the eye region and through physical proximity and contact," according to the Swedish researchers, which is exactly what some of the beagles did.

When the experiment was finished, the researchers divided the beagles into two lots of 95: the ones who were most sociable towards the human in the room and the ones who tried doggedly (pun intended) to solve the problem on their own. That, in and of itself, is actually quite "wolfish" behavior; the scientists note that a lot of studies of wolves show that they demonstrate no inclination to look to humans for help when they're faced with a difficulty, even if they're domesticated. They sequenced their genomes, and found that there were five gene variants in particular region of beagle DNA, chromosome 26, that seemed to be associated with more social behavior towards humans in dogs. It seems that, for beagles and dogs in general, friendliness may actually be in the genes.

This is where things start to get very weird. "Interestingly," the scientists noted, "four of the five genes thus identified [as associated with pro-human behavior in dogs] have previously been associated with social behavior disorders in humans." In other words, what alters behavior in dogs may actually also alter behavior in humans, though we have absolutely no idea if it works in the same way.

The main beagle gene with a distinct link to autism in humans is something with the snappy title of SEZ6L. In a study of the genetic inheritance of autism spectrum disorders in 2015, looking at seven extended families, SEZ6L was one of four genes that popped up as strongly tied to autism. Another, COMT, has been linked to aggression in teenagers with ADHD and with incidents of schizophrenia. The genes that might influence how dogs interact with us, in other words, also seem to play a role in how we interact with each other.

Before you wonder, there's no suggestion that grumpy dogs with certain alterations of their SEZ6L genes might be "autistic" or "schizophrenic." The beagles weren't tested to see how they palled around with each other, or whether their genes related to anything to do with their behavior around other dogs. It does seem, though, as if there's something about sociability in these particular genes, though they do different things in different species.

There are also limitations to this study. A Cambridge canine geneticist told The Guardian that drawing a direct line between genes and specific behavior can be tricky, because so many genes can be involved. The genes the Swedes identified might only be "a small part of the story." There's a long way to go before this can be used for any definitive findings, whether they're about how we socialized wolves or how autism and social disorders can feature across the mammalian spectrum. Still, it's pretty remarkable to think that a gene can vary in one way to make beagles look to us for help, and in another to produce autism in a small child. Science is an incredibly strange thing.