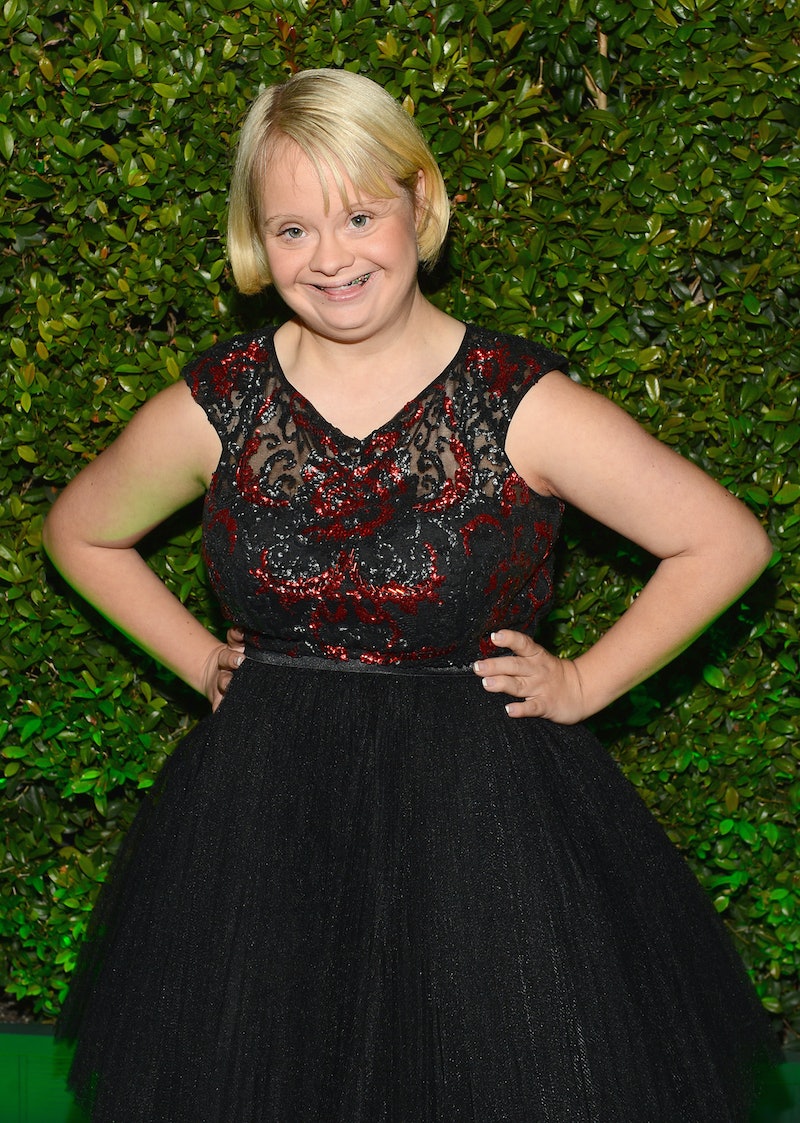 Down syndrome is a condition in which an individual is born with an extra chromosome (number 21 to be specific, thus why it's celebrated on 3/21) — as defined by the National Down Syndrome Sociey, “This additional genetic material alters the course of development and causes the characteristics associated with Down syndrome.” Such characteristics include, “[an] experience [of]cognitive delays, but the effect is usually mild to moderate and is not indicative of the many strengths and talents that each individual possesses.”

In honor of World Down Syndrome Day, take a moment to recognize the many talents our favorite actors and celebrities with Down syndrome, and those who advocate for Down syndrome, as well. Enjoy!

There are few people who can stand up to one Sue Sylvester on Fox's hit show Glee — one of those people is Becky Jackson who is played by the hilarious Lauren Potter. Check our her powerful PSA with co-star Jane Lynch about ending the use of the "R-word."

He's been acting for nearly his entire life, but had his big break-out role in 2007 when co-starred in the ABC Family series The Secret Life of the American Teenager as Tom Bowman, Grace's adopted older brother. He also guest-starred on Glee in the 2013 episode "Movin' Out."

You know her as Nan on American Horror Story: Coven. Her powers in clarvoyance are so strong that she's caught the attention of the Supreme. She may be underestimated by her fellow witches, but it only helps her character move up the ranks faster.

Jessop is one of the stars of BBC Three's Growing Up Down's. The documentary follows three actors with Down Syndrome as their Blue Apple Theatre Company works to produce one of Shakespeare's most challenging plays, Hamlet. Jessop has also starred alongside Nicholas Hoult in Coming Down the Mountain and has worked regularly in British TV since 2007. Check out a clip of his incredible performance as Hamlet:

Burke serves as the National Down Syndrome Society's Goodwill Ambassador and is best known as Corcky Thacher from ABC's Life Goes On. Burkes long career in Hollywood includes roles in films like Mona Lisa Smile and TV series such as ER and Touched by an Angel. He has traveled all around the world representing NDSS since 1994 and has used his celebrity to raise awarenedd and increase education and outreach about Down syndrome.

Barbanell is the scene-stealing funnyman from the comedies The Ringer, Workahiolics, and The New Normal. And as close friends with Johnny Knoxville (who is also an advocate for people with Down Syndrome), he's even braved the world of Jackass 3D.

Taylor (Far Left) can be seen alongside Barbanell and Knoxville in The Ringer and Jackass 3D. He also co-starred in the indie hit Dorian Blues. The Ringer came up against some criticism for its representation of people with intellectual disabilities, however, Taylor and Barbanell stood by the project.

As the actress puts it herself, "I was blessed with a sister who has special needs. Now, I work to impact the lives of similar young adults nationwide." Her organization Eva's Heroes works to enrich the lives of individuals with intellectual special needs and provides a community full of activities and programs all year long.

In 2011 Sharon Stone spoke at the National Down Syndrome Society's Annual Luncheon for which she helped to raise more than $100,000.

The multi-faceted actor and musician has been a longtime supporter of the Global Down Syndrome Foundation as his DeOndra is a person with Down syndrome. He's done so much for the Foundation that he was awarded the Quincy Jones Exceptional Advocacy Award in 2012.

More like this
'The Capture' Is Finally Back – & S2 Looks Tense AF
By Sophie McEvoy and El Hunt
A 'Blue Peter' Legend & 'EastEnders' Star Have Completed The 'Strictly' 2022 Line-Up
By El Hunt and Sam Ramsden
The 'Black Bird' Stars Are Both Heading Back To Apple TV+
By Brad Witter
Ellen DeGeneres, James Tupper, & More Celebs React To Anne Heche’s Death
By Brad Witter
Get Even More From Bustle — Sign Up For The Newsletter