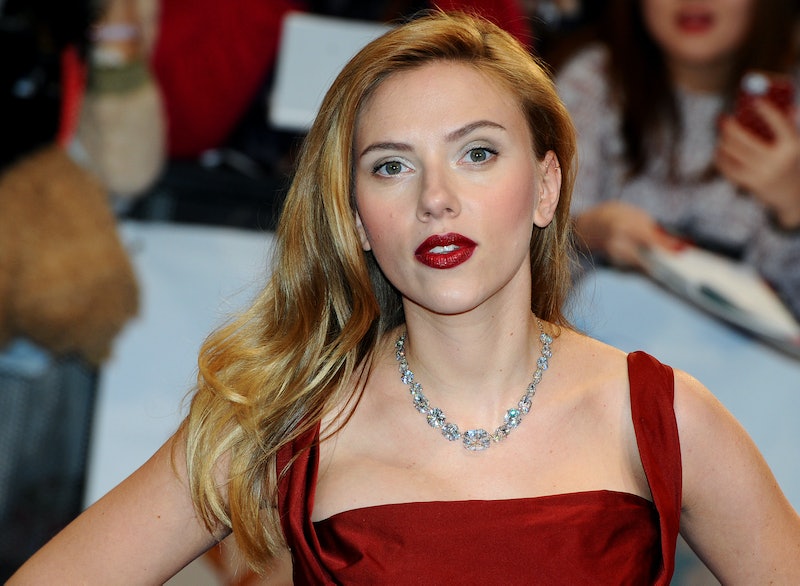 Hey Marvel, listen to this woman's husky voice! Scarlett Johansson has put in a request for a Black Widow Movie . So will the Avengers actress get this film? "If you want to see a Black Widow spin-off movie, then I want to see it," she said to reporters on the red carpet for Captain America: The Winter Solider. "We'll see. We'll put the request in to Marvel tomorrow."

It makes sense — we've got a Captain America spin-off, so why not a Black Widow movie? Isn't it about time that we see a stand-alone spinoff that features a woman? Why are all of these movies spearheaded by testosterone?

Apparently, it all comes down to storytelling, which is a euphemisms for "men run this shit."

But, okay. We're willing to hear this out a bit:

Essentially, an entire movie zeroing in on Natasha Romanova (The Black Widow) would have to make sense with all of the storytelling going on with these characters. Kevin Feige, who's the President of Production at Marvel Studios, came to the storyline's defense when he spoke to Badass Digest. He also said that he feels that the Black Widow is getting ample screen time in the Captain America films. He said:

I think [Black Widow] has a central leading role in this movie [Captain America: The Winter Soldier]. What people are really saying is, “When are you doing a standalone female superhero movie?” The answer is: I don’t know. We only do two a year; we know more or less what’s coming up through ‘16/’17. With Widow what’s great is the interaction with all the team members, and the question is whether we want to pluck her out of that.

I’m very proud of the way the Marvel movies handle the female characters who are in all the movies we are making, as opposed to feeling the pressure of ‘When are you doing a female movie?’ We’re exploring a lot of Widow, and that’s going to continue with Age of Ultron in a big way.

So he hears that it's time for a movie fronted by a lady. UH, YEAH. Ladies can be superheroes, too. But hold the accusatory phone! He's not against lady-fronted films. He said, "I like the idea if we’re going to do a [female lead...to] do a new one. Do a wholly new character, do an origin story." So wait a sec — does that mean no Black Widow movie? Will Scar Jo not get the movie she wants?

It's a tricky conversation to have — no matter what a producer says, if he's not putting out female-fronted superhero films, he's going to look like he doesn't believe in female power. Yet, we can't deny that strong female characters exist in the universe. He does have a responsibility to telling a story, but it shouldn't take this long for such a popular franchise to embark on having a Y chromosome headlining a movie.

It might be wise to take a cue from the husky-voiced star — especially if she puts in that request herself. We'll have to see how that goes...

More like this
Lego Just Announced Its 'Black Panther' Set Release Date
By Maxine Harrison
The 50 Most Powerful Characters In The Marvel Universe, Ranked
By Johnny Brayson and Nola Pfau
Lin-Manuel Miranda & Tituss Burgess React To 'Little Mermaid' Casting Backlash
By Radhika Menon
UK Viewers Will Have To Wait To Watch The Handmaid’s Tale S5
By Maxine Harrison
Get Even More From Bustle — Sign Up For The Newsletter