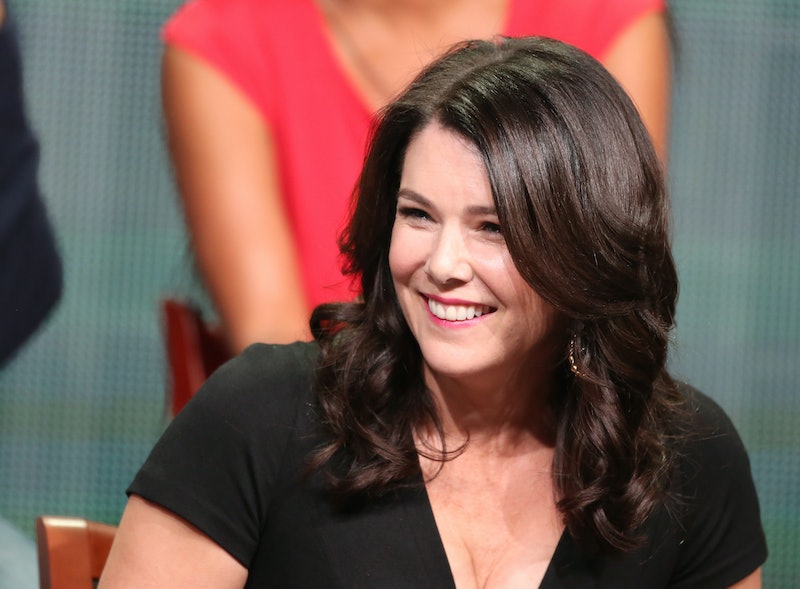 If you're a fan of Gilmore Girls, November 2016 is shaping up to be pretty much the best month ever. Not only is the highly-anticipated reboot of the show hitting Netflix right after Thanksgiving (Nov. 25, to be exact), but Lauren Graham's first ever essay collection, Talking As Fast As I Can , comes out just four days later. It's a huge month for all things Gilmore, and no one is more thrilled about it than Lorelai herself, Graham. From her adorable throwback photos to her excitement over Luke's Diner Day, Graham is happily sharing her excitement about the month ahead with her many fans. Yet apparently, chatting about Gilmore Girls now is a lot easier for the star than it was for her to write about it, back when the creation of her essay collection was underway.

"It was actually hard to write about the show the first time, because it was so intense, and so many years ago, and so many episodes," Graham tells me while promoting her new film Middle School: Worst Years of My Life. "So I actually went back through and had to take a look at it."

Meaning: right about the time you were embarking on your first (or let's be real, 10th) marathon of Gilmore Girls, Graham was probably doing the exact same thing. In her case, though, it was all to refresh her memory of what it was like to film those seven seasons, and to compare it to the process of doing it all over again for the Netflix reboot, in two chapters fittingly titled "What It Was Like, Part One" and "What It Was Like, Part Two." The book covers much more than Gilmore, of course — topics range from Graham's real-life romances to her stint guest-judging Project Runway — but the star hopes that its release complements the Netflix show once they're both released.

"Definitely, it is a companion piece," Graham says of her book. Talking was in the works long before the Gilmore reboot was announced, but, Graham says, the news made its existence even sweeter — and much more opportune. "The timing of the last year, I could not have predicted it," she explains. "A year and a half ago, when Parenthood ended, I didn’t even know what I wanted to do next, and the conversation about Gilmore Girls had been going on for so long, I had no real reason to believe it was any more real than it had been for the previous eight or nine years. So I actually started thinking about this book before that happened, and when that happened, I thought oh, OK, here’s something."

Once she realized that she would have new Gilmore Girls material to work with, Graham adds, the book gained a structure it was missing before, since she realized that her essays on filming two versions of the show could bookend the collection. "I wanted something that made it feel... like, here’s why I feel compelled to tell this story," she says. "And to me, the idea of the oddity of doing a show and then unexpectedly doing it again so many years later gave it kind of a framework that made sense."

In the collection, the star writes about how surreal it feels to see the show return nine years after its "finale," and to reunite with the cast and crew. "It’s like going back to college, but you know exactly what you’re doing and what you want to do and who you want to be friends with, and you get to do it all over again and appreciate it and understand what a great significant thing you’re in," Graham says. "That just really felt like just an incredible opportunity." As she describes in detail in the book, playing Lorelai, both in the original show and in the reboot, has never felt to her like anything but a blessing; "the only burden," she says, has been that outside Gilmore, it's been hard for her "to find something as well-written and as exciting to wake up and get to do."

"I felt from early on in the first Gilmore Girls, it’s such a perfect fit," she continues. "I loved the language, I came from the theater, and that’s what really gets me excited. There was just so much to play." For fans of Gilmore, getting to hear Graham's thoughts on taking on her now-iconic role and returning to the beloved show is as good as it gets — although the actor herself was a bit hesitant when it came to sharing behind-the-scenes Gilmore stories. Despite what many people might assume due to her on-screen roles (and from the the title of her book), "I don’t love talking about myself," Graham says. Writing the collection, she was happy to share her thoughts on matters both public and personal, she says, but it took some time to figure out a balance and not "overshare," she says with a laugh. Not that any fans would complain if she chose to spill more details, of course — the more Graham and Gilmore Girls there is in the world, the happier everyone is.

More like this
A Familiar 'Sex Education' Star Just Got A Major Role In Fantasy Teen Drama 'Silver'
By El Hunt
12 ’90s Movie References You Missed In 'Do Revenge'
By Radhika Menon
Netflix Reveals First Look At Wednesday In The 'Addams Family' Spinoff Series
By Bustle Editors
Paul Mescal, Man Of Mystery
By Samantha Leach and Heather Hazzan
Get Even More From Bustle — Sign Up For The Newsletter