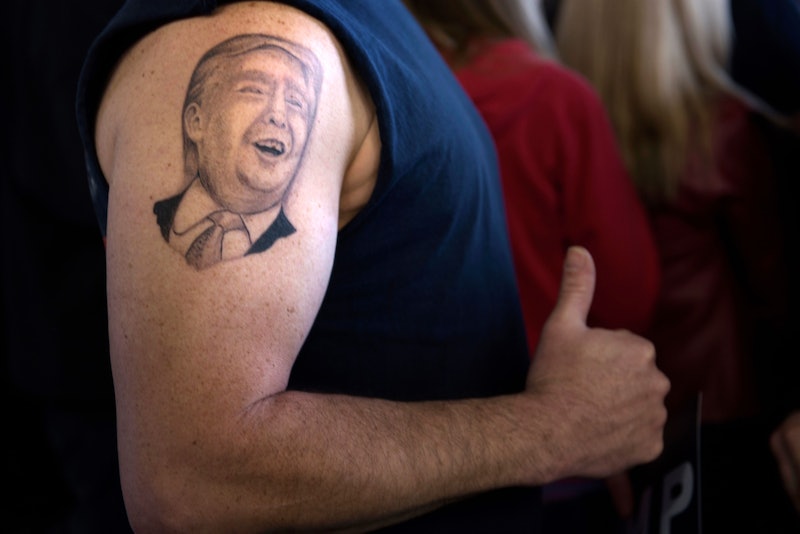 2016 has given us possibly the most contentious presidential election in American history, fueled by two of the most controversial and divisive candidates ever. It make sense that people have largely chosen sides and are sticking to them passionately, since the candidates near the ends of the political ideological spectrum. However some people have gone completely overboard in their fanaticism, flying right past passionate political spectator and into full on fandom. These 16 Donald Trump tattoos will make you feel better about your life choices — because at least you don't have The Donald permanently inked on your body.

Personally, I still get a little embarrassed for people when I still see them driving around with Romney/Ryan 2012 bumper stickers on their cars, and these tattoos are an extreme extreme of that. It doesn't help that a tattoo shop in New Hampshire was giving Trump tattoos for free leading up to the state's primary in February, which undoubtedly encouraged people to forever mark their allegiance to a guy who's probably not going to win the election and will only be relevant for the next 10 years, max. Poor decision making skills aside, these tattoos are at least a laugh for everyone else, even if they weren't the best choices ever made.

Thirteen hours just to get this guy on your arm is an instinct that I simply cannot comprehend. To each his own.

This more minimalist tattoo is arguably a better choice, but still not a great one.

Yes, the stars are replaced with dollar signs. It'll be Trump's first official act as president if he's elected.

There's some really interesting symbolism here, but I'm a little too traumatized to deconstruct it.

Out of a stunning display of not understanding what that phrase means, this tattoo was born.

In the mirror, it reads "PMURT."

Fun fact: that was his actual head to body ratio as an infant.

The design is actually rather nice, but the underlying message is obviously the real issue here.

Direct and to the point. Literally only applicable once, maybe twice.

I think I would actually scream and run away if I saw this in person.

This whole election would be saved if President Bartlet was running for office.

Like a "tramp stamp," but a million times worse.

A more traditional play on the lower back tattoo, this Trump ink features some of his favorite things: buildings, being loud, and money.

In case you wanted to switch up the design a little.

I will admit that the art on this tattoo is actually pretty good, but I was a little distracted by the fact that the tattoo literally takes up the woman's entire butt cheek.

This one's just a drawing, but you can imagine the majesty of it permanently affixed to someone's body.

You can always feel proud that you didn't get a Donald Trump tattoo, unlike these people and the countless others not mentioned above. Just try not to think too hard about what it means for the rest of the country.

More like this
Meet Foreverist, The Skin Care Brand That Keeps Tattoos Looking Fresh
By Audrey Noble
Christina Aguilera Took A Powerful Stand At Brighton Pride
By Sam Ramsden
Are John Legend & Kanye West Still Friends? The Singer’s Latest Update Is Candid
By Brad Witter
'Scream’s Courteney Cox Has Broken A Major Horror Record
By Sophie McEvoy
Get Even More From Bustle — Sign Up For The Newsletter