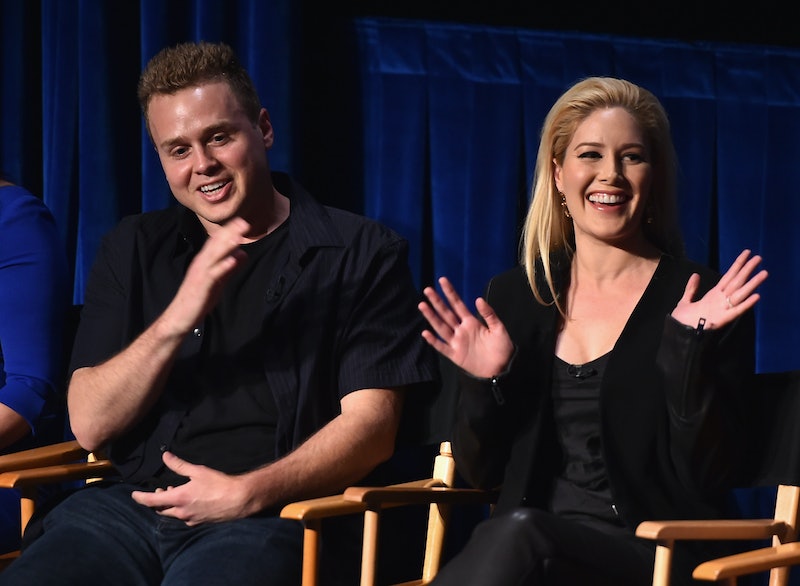 There's something oddly fascinating about beautiful people fishing for problems in a world in which "work" is lunching in West Hollywood and partying on tables at Les Deux, hence my unending obsession with The Hills. Heidi Montag and Spencer Pratt, who became the show's villains following their beef with star Lauren Conrad, recently sat down with Vulture to discuss what she thought was real and what was fake on The Hills. Though rumors of the reality show being less than real have plagued the series since its inception, the specific drama that Montag alleges was faked on The Hills may surprise you.

Montag and Pratt had a whirlwind romance that very few people on the show seemed to approve of. Conrad, Montag's former best friend and roommate, ended her friendship with Montag after Montag refused to acknowledge whether Pratt had anything to do with the rumors of Conrad's alleged sex tape. However, the people who seemed to loathe Pratt the most on The Hills were her own flesh and blood. Montag's parents seemed to hate him, and tried to reason with her about the nature of their relationship over many of The Hills' famous lunch scenes. It wasn't hard to see why: Pratt behaved like a royal jerk on the series, snarking at every opportunity he could and insulting her sister and friends on a regular basis.

However, Montag alleges that whatever drama was between Pratt and her parents was all a fabrication of the series:

My family loved Spencer. The minute they met him, they loved him and they were so excited for me. And when the producers asked them to not like him on-camera and Spencer was like, “Yeah, go ahead, whatever, it's fine in the moment.” But then when it plays back, it hurts a little bit more than everybody realizes. It feels a little more real, and people go off-script — it's never really a good idea to pretend to not like somebody on TV. It becomes almost real. I think we should've not listened to the producers with that, and I wish we would have just left my family out of it. They really did and do love Spencer.

If what Montag is saying is true (Bustle reached out to MTV and has not heard back at this time), Pratt really should have gone into acting instead of continuing his reality show career. Clearly, this guy was born to play a villain; he totally sold the role of "person no one would want their daughter dating" better than any of the guys on MTV's Parental Control did. Of course, no matter how her parents felt about Pratt, we know one person whose feelings for Montag's now-husband were the real deal.

How do you feel about Pratt, Lauren Conrad?

The mythology of The Hills is still unraveling, and I can't wait to hear what other tidbits about the less-than-real reality show the cast will reveal in the future — and whether or not the tidbits they do reveal are accurate or not.