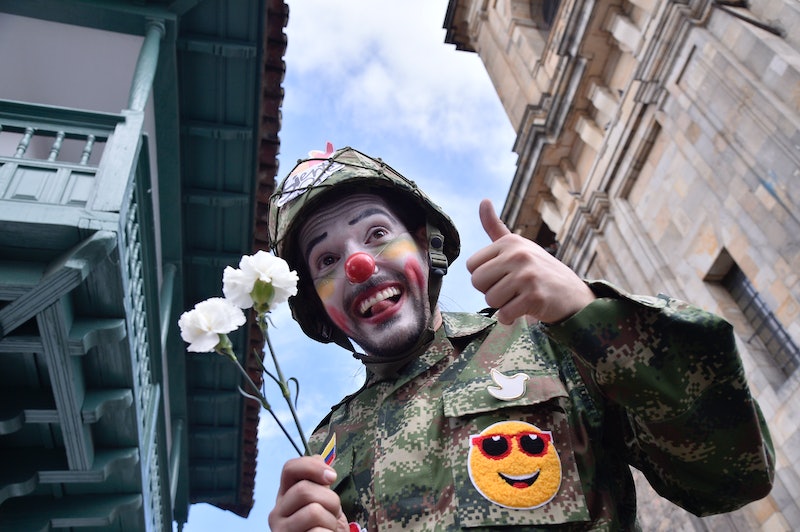 File this away into sentences I never thought I would have to type: In response to the recent wave of creepy clown sightings across the country, there has been a #ClownLivesMatter march scheduled in Arizona on Oct. 15. Professional clowns will be gathering to walk the streets of Tuscon in full clown makeup and costumes to combat the idea that clowns are "psycho killers." Anyone with a fear of Stephen King's Pennywise character from the classic novel It is suggested to stay very, very far away.

Numerous clowns have been spotted across the country within the last few months, usually lining pathways and forests near suburban homes. They've been known to hold weapons, cause false alarms for police, and, obviously, scare children. The #ClownLivesMatter march was apparently organized to fight back against the bad reputation these sightings have caused the clowning profession.

According to the International Business Times, more than 100 clowns are expected to populate the darkest corners of your nightmares for the walk. A flyer for the march reads: "This is a peaceful way to show clowns are not psycho killers. We want the public to feel safe, and not be afraid. So come out, bring the family, meet a clown and get a hug!" How cute?

In fairness to the clowns, IBT spoke with a local Minnesota clown about how the recent uptick in scary clown sightings is hurting their profession. "It's heartbreaking. We are very concerned," he said. "Most people get into clowning because they love to make people laugh. They love kids. This is ruining it. It is going to change what we are able to do."

Even It author Stephen King has commented on the strange phenomena. He tweeted: "Hey, guys, time to cool the clown hysteria — most of em are good, cheer up the kiddies, make people laugh."

Less funny, however, is the decision to co-opt that particular hashtag for the clown march. While clowns may be getting a bad rap, they're not exactly getting persecuted here, either. Taking the #BlackLivesMatter and #BrownLivesMatter hashtags for the purpose of promoting a clown walk is tone deaf, to say the very least. The string of clown sightings definitely doesn't compare to the wave of police shooting of unarmed people of color.

But as we've seen with #BlueLivesMatter and #AllLivesMatter, it only becomes a matter of time before someone twists the original intent of a hashtag. At least this is for a decent enough cause, no matter how creepy. I guess.