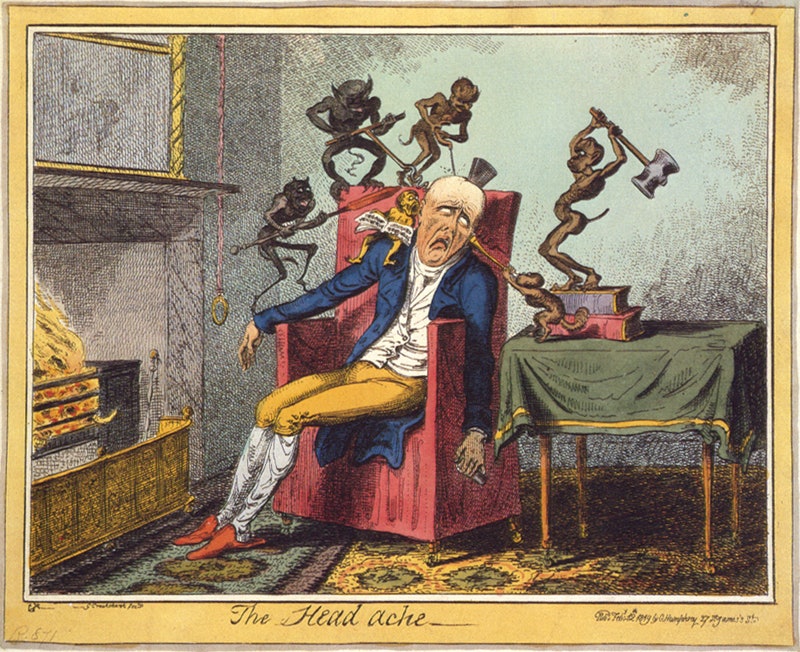 If you've ever had a migraine, you can likely attest to the need to cure it immediately, yesterday, because of the excruciating pain. (My brother gets them regularly, and is in the habit of carrying such an arsenal of high-level painkillers on his person just in case that he could probably do a good approximation of a pharmacy in an emergency.) Unfortunately, modern painkillers are extremely new in the grand scheme of things, which means that humans from previous centuries faced with the dreaded skull-cracking experience were left to try and get some comfort on their own. Their ideas for help, you will not be surprised to know, ventured from the strangely soothing to the frankly weird. Putting garlic inside the skull of a live person, anybody? Vulture brains up the nose? No?

People have tried everything to cure migraines; a history of migraine treatments published in neurology journal Brain documents cures as diverse as bloodletting, handling electric eels, and binding a dead mole to the head. But there are some treatments that especially distinguish themselves by being very ancient, very odd, or both.

Migraine is one of those conditions that we can trace back relatively far in medical texts, which must give us all a pang of empathy: consider the migraine-sufferer in ancient Egypt, condemned to be born in an age when painkillers consisted of magic clay crocodiles. It's a hard life.

Headaches, it appears, have been around for as long as we've had heads, and the ancient Sumerians record a remedy around 7,000 years ago that was reasonably benign, as far as this list goes: shaving a goat and getting doused with water.

"Take the hair of a virgin kid, and let a skilled woman spin it on the right side, then double it on the left and tie it in twice seven knots. Bless it with the incantation of Eridu, and with it bind the head. Cast water over the sick man, so that the headache may ascend to heaven."

Interestingly, we actually have a few "incantations of Eridu" (which was a holy place, not a god, and heavily featured in Sumerian religious thought) in translation, if you'd like to try this remedy for yourself.

Tie A Clay Crocodile To The Head

One of the most ancient remedies in human history for headache-related problems is found in the Ebers Papyrus, a medical text dating from around 1500 BC, though we can't be exact on that. It's a compilation of over 700 medical remedies and among them is the idea of migraine cure, but the result may not have looked entirely dignified. The Ebers Papyrus prescribes a crocodile made out of clay, with grain in its mouth and "faience eyes" (a kind of glass invented by the ancient Egyptians), to be tied to the patient's skull with strips of linen inscribed with the names of divinities.

The ancient Chinese physician Huan T'o, who lived in around the 1st and 2nd centuries (his dates are uncertain) is renowned for several things in the history of medicine: one is that he was possibly the first doctor in China to use anesthesia on patients and perfect the art of acupuncture, while another, more remarkably, was his facility for curing migraine-inducing tumors by finding birds inside them.

According Lois Magner's History Of Medicine , Huan T'o was operating on a patient whose skull tumor was causing severe headache, a last resort after acupuncture and herbal remedies had failed. He opened the tumor and a canary flew out, prompting an instant cure. (Unfortunately, Magner records that the physician's migraine-curing days were also his undoing, as he recommended drilling a hole in the skull of a headache-prone emperor, who suspected the physician was trying to kill him, reasonably enough, and had him executed.)

Put A Vulture Brain Up The Nose

There's an astonishing (and, to many historians, extremely odd) text dating from around 800 AD that talks extensively about vulture medicine. There are many weird things about the text before we even get to the vultures: it styles itself as "The Letter Of The Vulture," is meant to be from the King of Rome, and pops up, entirely unheralded, at the end of a legitimate medical text by the Roman author Dioscorides. (Peregrine Horden, in the Oxford Handbook of the History of Medicine , thinks that the monk transcribing the medical work found himself faced with a blank page, "too rare and expensive to leave," and had to fill it with something.)

Why he decided to fill it with 17 remedies related to vultures remains unclear, as does whether any of the actual remedies were used, but they're amazing. Vulture brains and skulls, it notes, are particularly useful when it comes to severe migraines, provided that you decapitate the vulture properly with the correct incantation. If you want a remedy fast, you should wrap the bones of a vulture-skull in deerskin and then put it on the head, or mash up the brains with oil and put them up the nose. All things considered, that's basically as gross as it gets.

Place Garlic Inside The Skull

If you want a qualified surgeon, Abulcasis was regarded as the best of his time. He resided in Cordoba, Spain, in the 10th century and was the physician to the Spanish caliph, effectively marking him out as the most prominent medical mind of the period. His ideas about migraine, though, may make you regard him with slight concern. He had two main ideas about what to do in cases of severe headache: put hot pokers on the head, and perform a surgical procedure involving cloves of garlic.

The best thing about this set of ideas is that the hot poker was meant to be the milder remedy. The garlic came if that didn't work (and remember, they were operating in an age without anesthesia): the eminent surgeon would make incisions in the temples of the afflicted person and put pieces of garlic inside them. At least the garlic was peeled first?

Remember the Islamic doctor with the dead moles? That's not the only contribution made to the history (bizarre and otherwise) of migraine treatment by Arabic physicians. A century later, the 11th century physician Ibn Jazla authored an influential text that was translated from Arabic into Latin, and contained many tables for dealing with various ailments, including, helpfully, both the "full regal treatment" and a less expensive treatment for those who weren't possessed of gigantic amounts of wealth. Convenient!

When it came to migraines, the text's translation from 1523 distinguishes between eight different types of headache, from those created by hot or cold weather to "hemicrania," the term at the time for migraine. While other, less severe headaches could be cured by eating fat chickens and pheasants (or "soft eggs" for the fiscally challenged), the cure for the migraines involved sneezing on the nostril closest to the source of the headache, which he recommended inducing using "oil of bitter almonds". (If you were poor, your best chance was putting oil of peonies on your head.)

Grind Up Houseleeks And Earthworms To Put On The Forehead

When it comes to widely used migraine cures of the 17th century in England, the Routledge History Of Disease suggests that we look at the "recipes" of Jane Jackson, who published A Very Short & Compendious Method Of Physic And Surgery in 1652. Her book has yielded one of the most famous remedies for migraine ever recorded: "take houseleek [a kind of succulent] and garden worms [more of the leek than the worms], and stamp them all together; put thereto fine flower, make it plasterwise, spread it on a fine cloth, and lay to the forehead, temples and all."

The really interesting thing about this is that, as the Routledge points out, Jackson likely didn't make this up out of nowhere. Earthworms were seen in other migraine remedies some 35 years beforehand, and Jackson's version wasn't even the most peculiar one; instead of earthworms, another remedy from 1658 recommended that houseleek be mixed with breastmilk, with "a little rosewater," presumably to make the mixture smell a bit less weird. That can't help with the nausea.