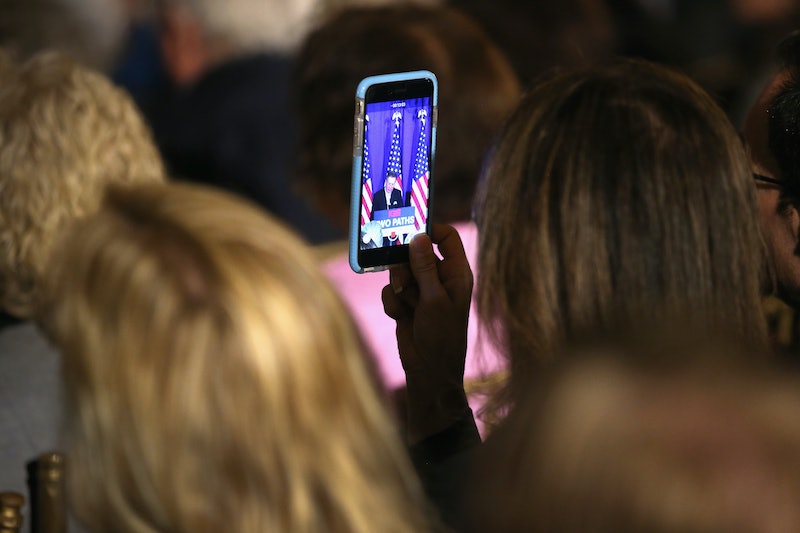 The sad reality is, we know our cellphones aren't good for us. The screens are full of germs, they may be putting us at risk for cancer (verdict's still out on that one, though) and we're constantly accidentally walking into things because we're busy staring at Instagram/Snapchat/The Bustle App. As if all of these weren't bad enough, emerging research shows that the light from phone screens may be damaging our skin.

We've known for a while how bad the UV rays from the sun are for us (as in, they can cause Cancer and other skin disorders) but scientists are just now starting to figure out the effects that other types of light, including the kinds that are emitted by screens, can have on our skin. Phones' "blue light" falls in the middle of the light spectrum, between UV rays (from the sun) and infrared rays (from heat) and we still don't know how, exactly, chronic exposure to such intense visible light impacts our skin health.

"Blue light itself, unlike solar UV radiation, does not contribute to skin cancer, because it doesn't induce DNA mutations the same way the sun does," says dermatologist Dr. Patricia Ceballos. "But one study detected increased pigment production in skin exposed to blue light, which means that it's theoretically possible that chronic exposure to our smartphones and other electronic devices carries an increased risk of pigmentary disorders such as hyperpigmentation."

Thankfully (especially for those of us who have cell phones permanently glued to our hands) the science behind these claims is still a bit shaky. According to Dr. Ceballos, "The likelihood that blue light leads to premature aging of the skin is very remote. And its role in hyperpigmentation remains speculative."

However, it's not all good news: There are studies that show that blue light may give off infrared radiation, and therefore could have harmful effects on the skin, including premature aging, by releasing cell-damaging free radicals. "Does this type of light have a negative consequence to skin health, like, is it causing skin cancer? Probably not." says Dove dermatologist Dr. Alicia Barba. "But is it causing premature aging? Less than UV, because we know UV does it, but it may be, at least a little bit and so protecting against it might be beneficial for skin to look better."

So how can you protect yourself, save for giving up your cellphone all together, just in case? "Notwithstanding the lack of solid evidence to the contrary, it is prudent to protect the skin with antioxidants such as vitamin C serum and mineral/physical sunscreens containing Zinc oxide and/or Titanium dioxide, or makeup foundation as a barrier between our skin and the HEV and Infrared energies emitted by modern devices," says Dr. Ceballos.

You can also use a blue light filter on your cell phone, or change the settings on your computer to reduce blue light emissions. Not only can taking these simple steps protect your skin, but they'll also help protect your eyes, too.

In the next few years, we'll start to learn more about what our phones are really doing to our skin, but until then it sounds like we can keep swiping without having to worry too much about it.